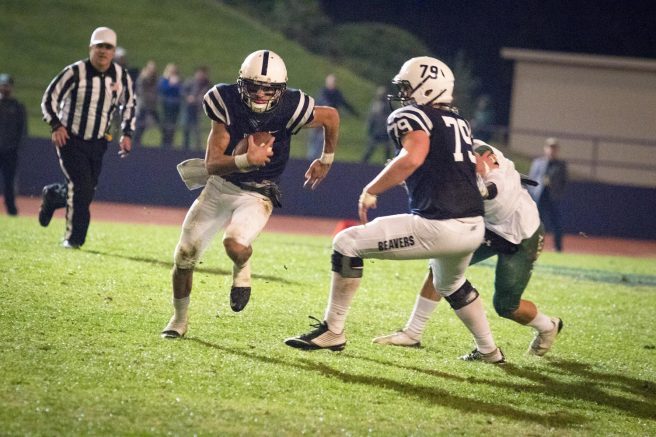 Quarterback Hunter Rodrigues scrambles for a first down during American River College’s 41-35 win over Laney College on Nov. 18. (Photo by Ashley Hayes-Stone)

American River College’s football team held off a late comeback attempt by Laney College to win its semifinal game 41-35 on Saturday, securing another shot at winning the NorCal Championship.

The Beavers entered as the No. 1 seed with home field advantage throughout the playoffs after posting a 9-1 record during the season, while Laney entered at the No. 4 seed, posting an identical 9-1 record.

Laney’s first drive ended in a three-and-out while ARC marched down the field to score the opening touchdown of the game courtesy of a goal line rush from Evyn Holtz. Julian Diaz missed the extra point attempt to leave it at 6-0.

“We’re really looking forward to hosting here at home in front of our fans on our turf and we couldn’t be more ecstatic to be returning to the NorCal championship game.” -Jon Osterhout

The Eagles responded with a long drive of their own converting a 4th and 2 into a 17 yard touchdown run by running back Ahmari Davis. KC Onwuemeka also missed his extra point attempt to leave it tied at 6-6.

The Beavers next drive was helped by two unsportsmanlike conduct penalties by Laney, which allowed quarterback Hunter Rodrigues to find wide receiver Arthur Jackson in the endzone from 21 yards out to retake the lead at 13-7.

The Eagles relied heavily on the running game, but began to show more confidence throwing the ball after halftime. They took the first score of the 2nd half with an eight yard rush from Davis to make it a two score game. Though it was quickly negated after Jackson took the ensuing kickoff return 90 yards for a touchdown, making the score 34-13 after the extra point.

After a punt from Laney, American River took possession on its own 14-yard line, but did not last long after a strip sack on Rodrigues resulted in the team giving up a safety.

Rodrigues said the team may have gotten too comfortable late in the game.

“I think we just got a little complacent. We felt good where we were at and we didn’t execute the way we would’ve liked to,” Rodrigues said. “We couldn’t get a good run game going which put us in bad situations on 2nd and 3rd down. We gotta get that fixed.”

The Eagles running game continued to batter ARC’s defense as Davis scored his third touchdown of the game, bringing the gap down to 13 points once again. After another three-and-out from ARC, The Eagles finally looked to have momentum on their side until quarterback Noah Suszckiewicz’s pass was intercepted by defensive back Lenny Nelson, and returned 75 yards for an ARC touchdown.

Coach Jon Osterhout said that the interception was important in holding on for the win. 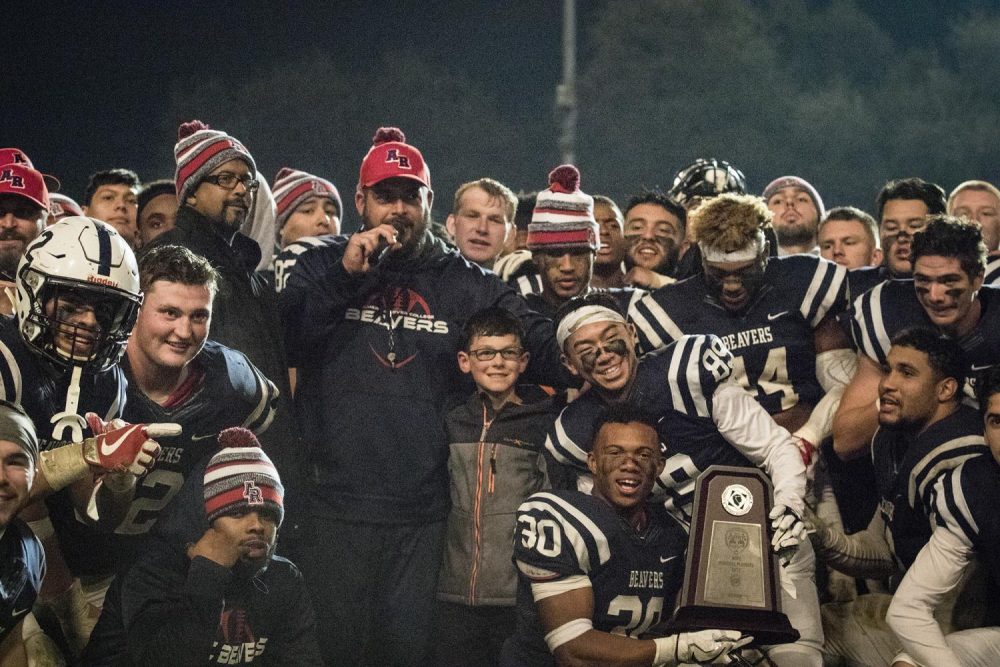 The American River College Football team celebrates its win over Laney College. With the win, they advanced to the Northern California Championships. (Photo by Ashley Hayes-Stone)

“The pick-six helped us out. We just couldn’t get anything going offensively,” Osterhout said. “When the offense isn’t moving the ball, the defense and special teams need to pick it up.”

The Eagles managed to get back two late touchdowns by running back Marcel Daney and had a chance at recovering an onside kick and stealing the game in the last minute, but the kick was recovered by the Beavers and the game ended 41-35.

Osterhout said that even though they struggled down the stretch, they are happy to have another shot at a NorCal title.

“We’re really looking forward to hosting here at home in front of our fans on our turf and we couldn’t be more ecstatic to be returning to the NorCal championship game,” Osterhout said.

Osterhout stressed the importance of preparation and practice ahead of the game.

“It just comes down to our overall preparation, physically, getting guys healthy, nutritionally, and getting everything right and putting a solid week of practice in,” Osterhout said. “This is a team built for success inside and out and everywhere in between.”

The NorCal championship game will take place Saturday at 6:00 at Beaver Stadium.

Be the first to comment on "ARC holds off Laney comeback attempt, advances to NorCal Championship"