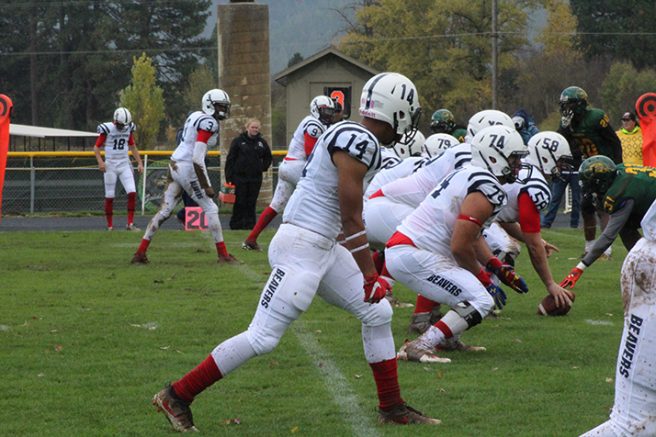 Players on the American River College football team getting ready to snap the ball against Feather River College on Oct 29, 2016. ARC won 40-0. (Photo by Mike Yun)

American River College’s football team is preparing to take on what might be their toughest challenge yet against Butte College, whose team is ranked seventh in the state.

Butte has won its last four games including a 48-28 win over Sierra, while American River have won five straight and are coming off a 40-0 shutout over Feather River.

This will be the fourth meeting between the two teams in the last three years, with each game being decided by three points or less. Butte won the last game on a hail mary pass.

Coach Jon Osterhout talked about the upcoming game and the potential playoff implications it may have.

“We know what’s at stake and we know that football team very well. They know us very well,” Osterhout said. “They have a very good coaching staff and so do we so it should be a tough hard fought game. Our guys are excited for the challenge.”

With ARC ranked first in NorCal and Butte fourth, this game could have serious playoff implications for either team, including dropping one out of playoff contention.

Running back Ce’von Mitchell-Ford said that the team’s win over Feather River gives them confidence for this week.

“This game was definitely a confidence booster,” Mitchell-Ford said. “It’s a good feeling going into Monday knowing when we are at full strength we can get these types of results.”

Another headline from this week is the re-emergence of quarterback Chris Guillen, who was knocked out during the first game of the season against Diablo Valley with a rib injury.

Guillen returned in time for the Siskiyous game, but did not attempt a pass until the game against Sac City.

Since his return, he has completed 11 of 16 passes for 162 yards, a touchdown and an interception.

Osterhout commented on Guillen’s resilience and demeanor since he was injured.

“I think Chris has done a phenomenal job,” Osterhout said. “He put himself in the position to be the starter and then got hurt. Griffin had played well and he’s had to ease himself back in. He’s kinda had to take a backseat and be the backup, but prepare on a daily basis.”

Guillen said that he loves to be on the field and be competitive with his teammates.

“It felt great to be back again, I love being out there competing with my teammates,” Osterhout said. “Definitely a good game to have before playing a team like Butte, I know coach will prepare and have us ready for Saturday.”

Osterhout did warn that the quarterback job is still a competition and that they can and will look into alternatives.

“We feel we have three really good quarterbacks with O’Rourke being the number 3, and our grayshirt Hunter Rodriguez is an unbelievable player,” Osterhout said. “With the top two, we feel really comfortable with both those individuals coming out and playing.”

“We won’t flinch in either direction and we won’t hesitate to go to the bullpen if we have to,” Osterhout said.

The Beavers will host the 6-2 Butte College this Saturday at 6 p.m.