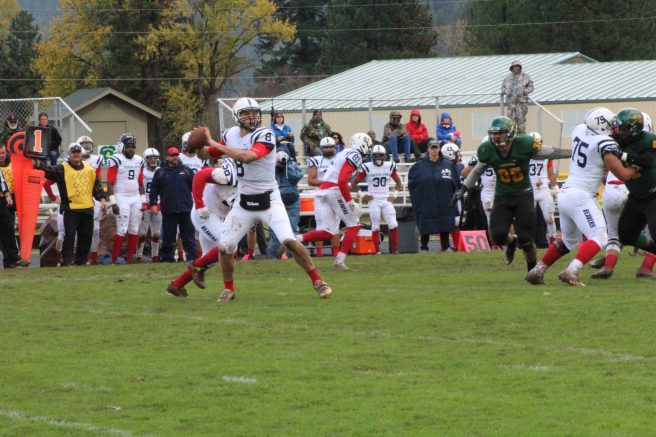 Quaterback Griffim Dahn throws the ball during a game against Feather River College on Oct. 29. (photo by Mike Yun)

In another dominant showing from ARC’s defense, the Beavers shutout winless Feather River College on Saturday, 40-0.

ARC started the game with a four play drive capped off by a 31 yard rush by running back Ce’von Mitchell-Ford to put the Beavers up 7-0, just 79 seconds into the game.

The Eagles struggled to muster any offense during the day, punting on their first five drives while the Beavers were able to add two more touchdowns thanks to rushes by Eddie Ortiz and Mitchell-Ford.

Mitchell-Ford talked about how the offensive line played their part in the rushing game.

“I feel like our defense has been amazing so this week coach put an emphasis on the offensive side of the ball,” Mitchell-Ford said.

“The guys upfront made my job easy, I felt like we did it as a whole today.”

Despite two interceptions from ARC, the defense did well to hold Feather River off, only allowing a field goal attempt which was missed by Eagles kicker Julio Vargas.

When everything was said and done, the Beavers went into halftime up 31-0.

In the 3rd quarter, the game took on a more defensive stance with ARC scoring a safety in the first five minutes of the second half, extending the lead to 33-0.

Feather River’s best chance to score came on their next possession, but faltered as they had two touchdown passes nullified by offensive penalties, with the drive ending after safety Moises Valcarcel intercepted a pass from Alexis Archie.

American River used three quarterbacks during the game with Griffin Dahn, Chris Guillen, and Max O’Rourke all getting chances to throw the ball, with Guillen throwing the sole touchdown pass to Damen Wheeler Jr. in the fourth quarter, to push the lead to 40.

Guillen said that while the game went well, there was always room for improvement.

“I think we did really well today, especially in the first half,” Guillen said. “We could always improve but for now we are very happy of how the game went.”

Coach Jon Osterhout commented on the team’s ability to win, even while traveling and in poor weather.

“A great win,” Osterhout said. “Very excited with the way we traveled, the way we prepared, and of course the way we played in tough condition.”

FRC was unable to put together a drive for the rest of the game as the Beavers held on to win their fifth straight game.

ARC has allowed 17 points in four games including two shutout wins against Siskiyous and Feather River.

Safety/Linebacker Lonny Powell talked about how the defense has stepped up their game this season.

“A few people got moved around to different positions and we just continued to work on getting better,” Powell said. “That loss to San Francisco woke us up as a team and we did not want to feel that feeling we did against them again.”