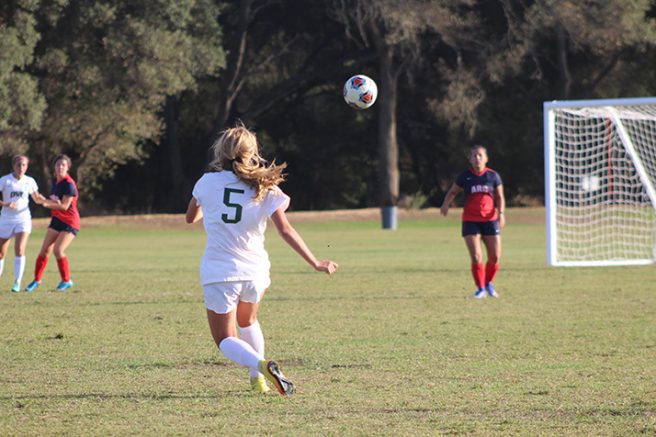 Diablo Valley College defender Zoe Ramer crosses the ball into the box from a free kick during a game against American River College on Oct. 7, 2016 at ARC. ARC lost 3-0. (Photo by Mack Ervin III)

The American River College women’s soccer team was unable to halt the attack of Diablo Valley College (DVC) suffering a 3-0 defeat to the division leaders on Friday.

The Beavers were strong on the defensive side for most of the first half as they tried to stop their opponent’s attack and move the ball forward on the counter attack.

Twenty-nine minutes in, a DVC corner kick resulted in the ball being deflected in the air and falling in the path of forward Maya Hymel, who slotted the ball into the lower right corner to make it 1-0.

Coach Paul Arellanes said that early mistakes are not something acceptable when playing a good team. 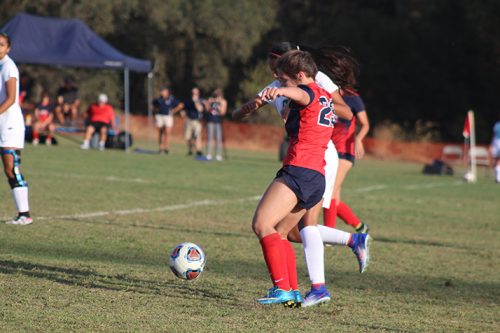 “They’re a good team,” Arellanes said. “Any time you play a good team you can’t make any mistakes, and the first goal was soft. We probably could’ve dealt with it better.”

Coming out of halftime, the Beavers committed another defensive error which allowed Vikings forward Noelle Lemos to set up teammate Cameron Chan for the second goal in the 47th minute. 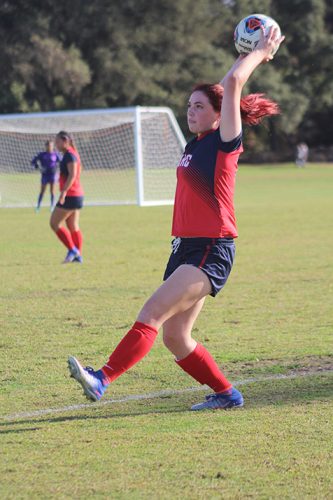 American River College defender Kahyla Ingman throws the ball back into play during a game against Diablo Valley College on Oct. 7, 2016 at ARC. ARC lost 3-0. (Photo by Mack Ervin III)

DVC took a primarily defensive stance for the rest of the game in order to preserve their lead and were able to limit ARC to three shots on goal in the game, compared to 12 for DVC.

Goalkeeper Sylvia Flood said that while their defence and midfield played well but the attacking needs some work.

“Our midfield and defense were pretty strong today,” Flood said. “Our forwards are good, we just need to push up more and attack their goal more.”

ARC was not able to score a goal and was handed its seventh loss on the season.

Forward Amanda Holtzen said that they were not expecting an easy game and that they need to work harder on certain things.

“It was a hard battle,” Holtzen said. “We came expecting a hard fight as they’re first in conference. We did our hardest, but we couldn’t find a way to win it.”

“We just have to work on our game, work on our first touch, work on man marking, and working as a team to find the net.”

Arellanes agreed saying that “silly mistakes” are costing the team.

“We need to focus on tightening up our play,” Arellanes said. “We don’t read the game very well and it’s something we need to get better and improve at.”

The Beaver’s next game is on the road against Santa Rosa on Tuesday.