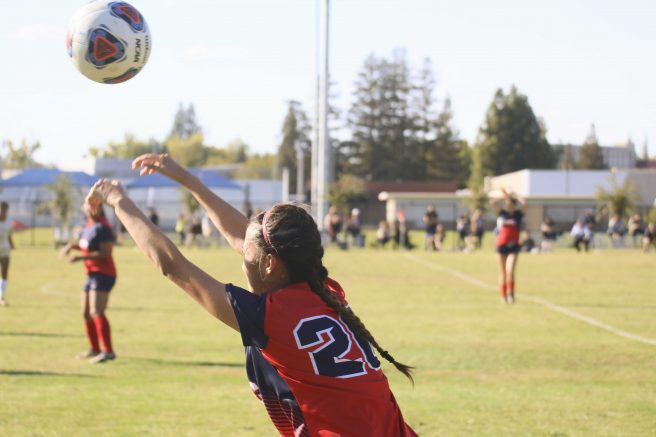 An early defensive mistake in the first half left American River College’s women’s soccer team on the back foot as it lost to San Joaquin Delta 1-0 on Tuesday.

Delta was aggressive on the attack for the first half of the game as they played through balls in the middle, and crosses into the box, trying to find a way through ARC’s defense.

The only goal of the game came through Delta forward Leah Manuleleua in the tenth minute as she headed home a cross from teammate Rachel Braun.

“We make one mistake in the first ten minutes and we ended up giving up a goal and we were chasing the game from there,” Arellanes said. We got caught with an early ball behind and got confused on who was marking who and left the goalscorer wide open.”

“We just have to be better at marking., Affonso said. “They got a goal in the first ten minutes because we weren’t marking well. We did well after that but that early mistake was the reason we lost.

The Beaver’s defense held strong throughout the rest of the game to keep it at only a one goal lead with goalkeeper Sylvia Flood saving 11 of 12 shots on goal from Delta.

In the second half, ARC brought on the attack as they tried to get a goal back, but their efforts were halted by Delta and the game ended 1-0.

The loss drops the team’s record to 3-6-2 on the season with 10 games remaining.

Arellanes said that the season outlook for the team is still positive.

“I still think that we’re making progress,” Arellanes said. “Our record isn’t where we hoped it would be but we’ve been in every game and this is the best conference in the entire state.”

“There are no easy games. We have to be ready to play. It’s just a matter of can we do more to get ourselves ties and wins.”

ARC’s next game is Friday against Diablo Valley College at 3:30 p.m.

Pride Center offers guidance to being an ally to LGBTQ+ community

Be the first to comment on "Early defensive mistake cost ARC; loses close one to San Joaquin Delta"