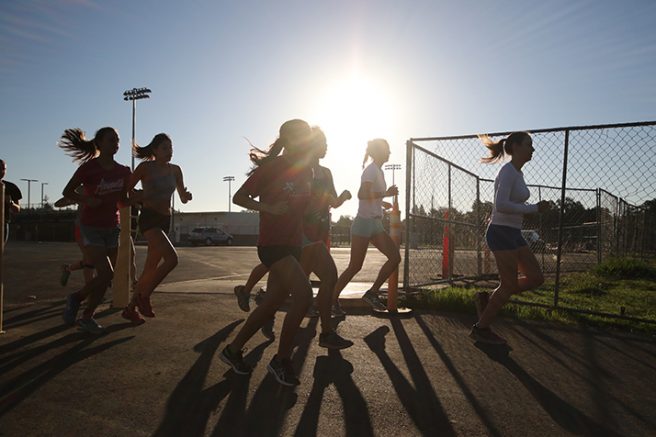 The American River College women's cross country team warm up in the parking lot behind the new soccer stadium before their first meet of the season at Sierra College on Sep. 2. (Photo by Cheyenne Drury)

The American River College women’s cross country team will race in its first meet of the season in the NorCal Preview tomorrow at Sierra College at 9:15 a.m.

Not only is it the first race of the season, but it is the first race hosted at Sierra College since they removed their cross country program for both men and women in 2007.

Jeanette Allred-Powless is the head coach for both women’s track and cross country teams, and today at practice commented on her hopes and expectations for the upcoming race.

“What we are looking forward to is really getting some more experience for our freshman ladies,” said Powless.

Elaine Howard is the assistant to Allred-Powless and wife to Jim Howard, assistant coach for the men’s cross country and track teams.

“I’m looking forward for the meet to see what we can learn about the girls’ fitness. It looks like we will have a fun season,” said Howard.

Jackie Leduc, Mayra Villa and Aubrey Stahl are the only three returning sophomores this season.

Villa competed in cross country at ARC in the fall of 2014 before she took a year off and decided on a whim to return and compete this season.

“It’s been like a year. A little bit excited, a little bit nervous because Jeanette said, you know, it will be good to get out there, just check it out,” said Villa. 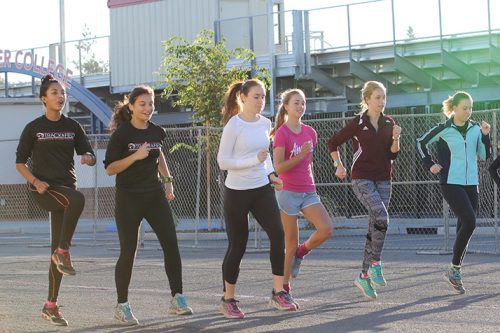 In terms of her race strategy, Villa said she wanted to focus on her pace.

“I want to see if I can hold a pace and not overdo it, because I know if I push the pace from the beginning I will not be able to come back from that.”

Allred-Powless mentioned the ARC volunteers that dedicated their time and effort toward cleaning up Sierra’s cross country course.

“It’s nice that American River College really spearheaded getting that course back into shape…we are super pleased (with) our teams going over there and putting in some manual labor.”

Allred-Powless was also appreciative of the contribution made by tomorrow’s competitors.

“…Sierra College came forward with their facility and maintenance and did some combined work so we could get it rolling again,” Allred-Powless said.

As for thoughts on the reintroduced and cleaned up course, Allred-Powless expressed eagerness to get back out there, and said “it is a challenging course. We’re super excited that we get to bring it back.”