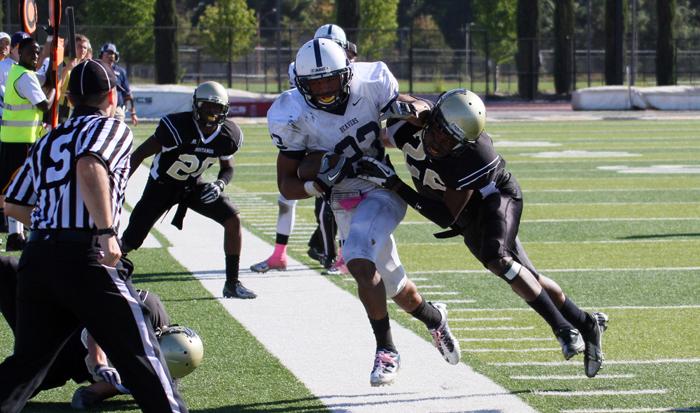 Former American River College running back Devontae Booker was selected in the 4th round of the 2016 NFL Draft by the defending Super Bowl champion Denver Broncos. Booker ran for 1,472 yards and 15 touchdowns in his senior season and was named an All-American. (File Photo)

Former American River College running back Devontae Booker was selected by the Denver Broncos with the 136th overall pick in the 4th round of the 2016 NFL Draft.

Booker, recruited out of Grant Union High School in Sacramento, played his first two seasons at ARC and racked up 1,472 yards and 15 touchdowns in his last season. He won community college All-American honors before transferring to the University of Utah.

Booker sat out a year after an incident involving an allegedly forged transcript at ARC, but returned to the Utes in 2014. He had a total of 2,773 yards and 21 touchdowns over two seasons before a torn meniscus cut short his senior season. 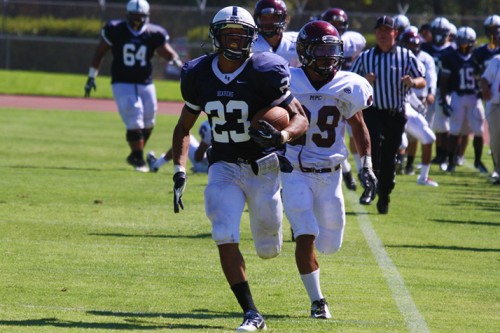 Former ARC RB Devontae Booker was considered to be one of the top backs in this year’s draft before being taken in the fourth round. Experts liked his vision and running style, but were concerned with his speed and injury rehabilitation. (File Photo)

“He was the most complete back I had ever been around in terms of the variety of combinations you look for in a superstar running back,” Osterhout said. “Tremendous speed, love and passion for the game of football, high football IQ, vision, change of direction, and the ability to put the ball in the endzone.”

Osterhout said that Booker played a number of different roles on the team and is a “ tremendous all around athlete” who has the potential to be a threat in multiple positions.

Booker, still rehabbing from the knee injury that shortened his season, hosted a pro day workout on April 12 at Grant Union High for NFL scouts since he was unable to do many workouts at the NFL Scouting Combine.

Eighteen NFL representatives, including running backs coaches from the Seattle Seahawks and the Oakland Raiders, were among the 150 people in attendance.

Broncos general manager and vice president of football operations John Elway tweeted his thoughts on acquiring Booker, saying he was “One of the highest rated RBs on our board. Physical, versatile & has great ball skills.”

Picked RB Devontae Booker in 4th rd from Utah. One of the highest rated RBs on our board. Physical, versatile & has great ball skills.

Osterhout said Booker’s work ethic and organization compares to another NFL talent he had mentored, Ndamukong Suh. Suh was drafted out of the University of Nebraska by the Detroit Lions in 2010 and currently plays for the Miami Dolphins.

“I think Devontae is, like Suh, very selective with regards to what they do in all facets of their life,” Osterhout said. “They have things prioritized so that they can get to the position that they’re in now.”

Osterhout believes Booker is ready for the challenge of the NFL.

“He’s got his degree, had a fantastic two years at Utah, which has continued his success from the junior college and high school level and he’s now ready for the next challenge,” Osterhout said.

While he may have been selected later in the draft than was initially predicted, Osterhout said that as long as he performs, draft position shouldn’t matter. 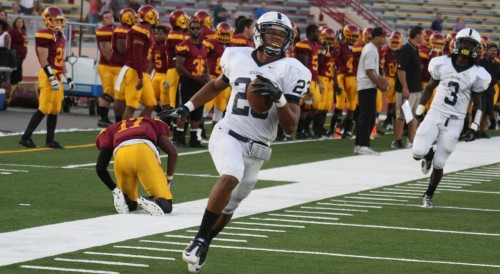 Former American River College running back Devontae Booker was one of eight players selected by the Denver Broncos in the 2016 NFL Draft. (File Photo)

“It doesn’t matter where he gets drafted, he’s gonna be successful and at the end of the day, it’s all about making the team,” Osterhout said. “You have to prove your worth every day regardless of where you get selected.”

One of Booker’s teammates from ARC, Arizona State University center Nick Kelly, also declared for the draft, but was not selected.

“Big ups to one of my all time favorites Nick Kelly! The Casa Roble/ARC/Arizona State alum will be punching his ticket this weekend into the NFL with former American River College teammate Devontae Dupree Booker,” Osterhout said in a facebook post.

Kelly played for the Beavers in 2012, before graduating and transferring to Arizona State.

There, he Started 26 consecutive games for the Sun Devils from 2014-15, was named a Two-time Pac-12 All-Academic Second Team member, and was part of an offensive line that paved the way for back-to-back 1,000-yard rushers.