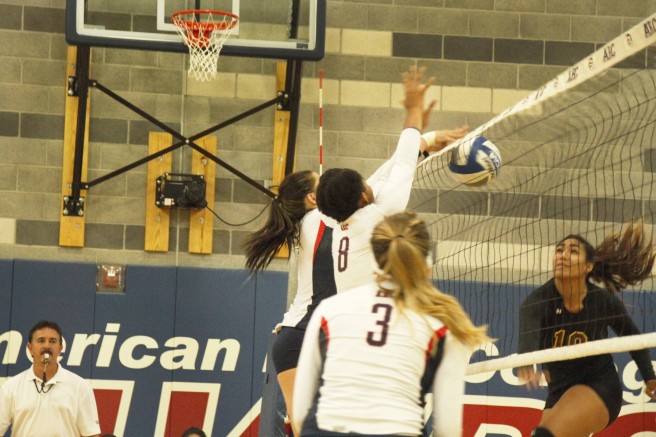 Though a coaching change was made over the summer and star middle blocker Erianna Williams missed nearly a month of the regular season due to an injury, American River College’s volleyball team reached the NorCal Regionals second round playoffs once again before falling to Foothill College.

“We all played really well,” said outside hitter Nora Troppmann on the match against Foothill. “If we had challenged ourselves to play better, we could’ve won.”

“I think we definitely could’ve gone farther,” said outside hitter Kaitlin Meyer. “It was just a matter of we weren’t really playing as a team toward the end of the season.”

Though only three players were on the team from the 2014 season, the differences in personalities of the two coaches took some getting used to.

“It was through most of summer,” said Udahl, one of the team’s setters. “I think it took almost all of that time. 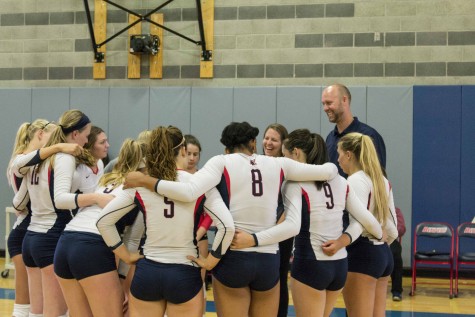 ARC’s volleyball team huddles up during a timeout in game two of its win over Lassen College. ARC won the game 25-12 en route to a 3-0 victory in the match. (Photo by Joe Padilla)

“(Hain) is a lot more aggressive, and (Gardner) is more relaxed as far as game time is concerned.

Meyer and Troppmann were two of the top statistical leaders on the team in 2015, with Meyer leading the team in kills with 292 and was one of the team leaders in spikes with 96.

Troppmann, who moved to Sacramento over the summer from Fairbanks, Alaska to join the team, finished with 99 spikes and 250 kills. 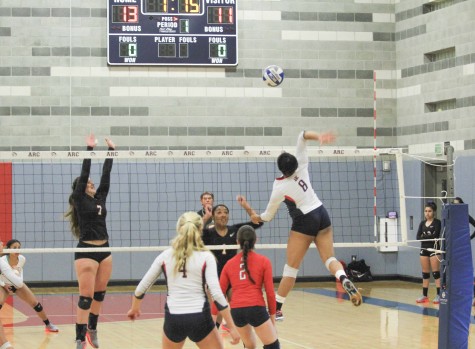 ARC player Erianna Williams gets up high to return the ball in a playoff win Tuesday night against City College of San Francisco at ARC. (Photo by Johnnie Heard)

The winning streak included a five-set victory against Feather River College, which beat ARC in the third round of the NorCal Regionals in 2014.

For Udahl and the other sophomores on the team, getting the chance to play and beat Feather River meant a lot.

“It’s good redemption personally because we lost to them in the playoffs last year,” Udahl said.

A preseason team bonding trip near Lake Tahoe brought the team together, which many players agreed was helpful to the team’s chemistry on the court.

“Spending every day together in practice and traveling together helped,” Troppmann said.

Udahl said that the trip helped immensely with the team coming together for the season.

“We took a team hike on the way up, at Lover’s Leap,” Udahl said. “If you’re not well-bonded, you usually don’t play well.”

Most all of the nine freshmen players on the team plan to return, which Meyer said will be key in improving for next season.

“Our biggest challenge will be connecting with the incoming freshman next year,” Meyer said.

Udahl said she plans to transfer to Chico State or the University of Nevada at Reno.

“I had a couple interests, but I’m just more interested in school,” Udahl said.