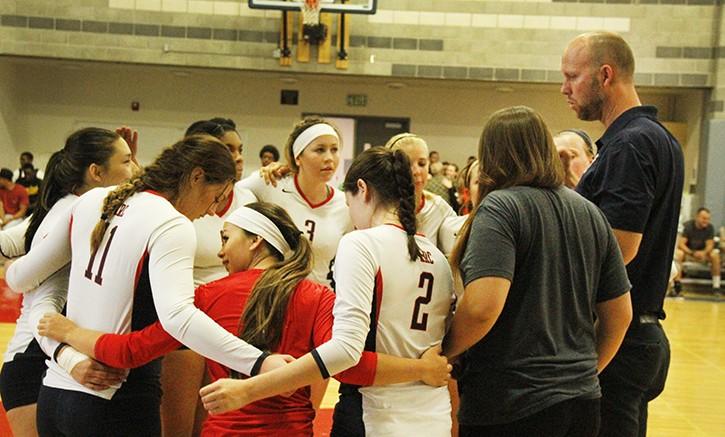 An earlier version of this article had ARC playing Lassen College in the caption. In fact, the game being played in the picture was against Hartnell College.

Gardner said the biggest thing he remembered from his two two Olympic Games was the overall excitement and “media frenzy.”

“It’s nice to represent your country, which is bigger than any of us (and) more important than any school or university that I’ve played for,” said Gardner.

“It’s my country. It’s where all my family and friends are from so that part was fun. Other than that it was just a lot of volleyball.”

Competing in nine other major international competitions, Gardner faces a whole new challenge as he takes over for Ashlie Hain, who is now the head coach at University of California at Irvine.

He has become a part of a program that has experienced sizable success in the past.

ARC has made it to the regional semi-finals in three of the last five years and the state quarter-finals in 2013.

“It’s a feather in our cap to have somebody that has a really really great reputation in the volleyball world. It certainly can’t hurt,” said Bruce Werner, the interim athletic director.

Gardner said he understands the expectations year-to-year are high, but knows that the adjustment for everyone will be part of the learning process.

“(I’m) not (going) to shake the boat too much but keep the expectations high for the college and the girls because they’re all expecting to do well,” said Gardner. “I want to hold the expectation high for us while still being realistic that we’re going to be doing a lot more work that’s new to them because I run a different system then perhaps their last coach did so there’s a learning curve involved.”

Gardner noted the difference between being a player and a coach, but said he is happy to be coaching.

“It’s easy as a player to really feel all the emotion and drama of the match and to be overly emotional or over invested in one play or one set,” said Gardner.

“I really enjoy teaching (and) being around by girls that want to work hard and get better and I’m convinced that we’ve got that on this team.”

Right of the bat, the difference between Gardner and Hain has been noticeable to some of his colleagues.

“They have different personality types entirely,” said Werner. “Gabe is very quiet, he has a very easy manner about him, he’s the kind of guy that when he speaks you listen. Ashlie was much more of a fiery type of personality.”

Kathy Sullivan-Torrez, a physical education professor and ARC volleyball coach from 1992-2005, said that the school is very excited to have Gardner on board.

“It’s exciting for our department and our players and he brings a wealth of experience at many different levels,” said Sullivan-Torrez.

Gardner stepped into the role in late July and only had a week before start of the preseason.

Even after two months, the team is still transitioning into the new system.

“Speaking with the girls, they’re looking forward to going to practice,” said Sullivan-Torrez. “(Gardner) gets in there and plays with them sometimes and I think that they like that,” she continued.

Freshman middle blocker Erin Fogarty recounted past practices where Gardner had got on the court and played with the team.

“He plays with us a lot and hits at us a lot harder than I think other teams would,” said Fogarty. “He’s hardcore is a good way to put it … he’s very knowledgeable skills wise and knows how to work against other teams.”

Freshman outside hitter Candice Reynoso said the team has really come together under Gardner.

As for why Gardner came to ARC, Gardner said that familiarity and competitiveness played a big role in his decision.

“I coached with Ashlie Hain before. We coached a club team together so I’ve been exposed to the campus,” said Gardner. “I think it’s a competitive team so I wanted to be here,” he continued.

“No coach has to coach. But you want to enjoy it when you do.”