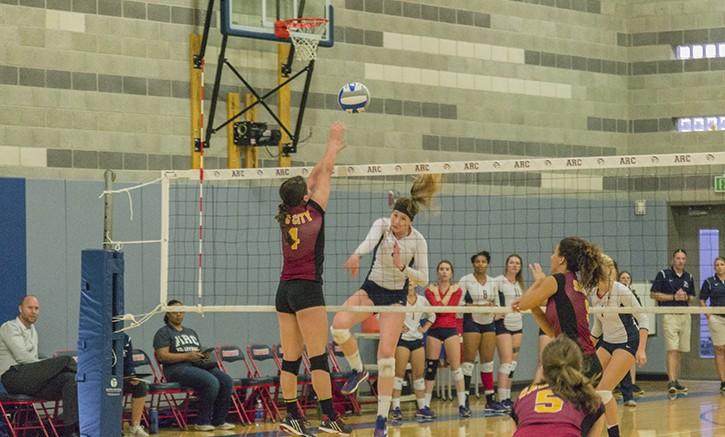 Riding snow machines, smoking salmon and hiking the wilderness of America’s most naturally preserved state were just some of the activities that Fairbanks, Alaska native and American River College volleyball player Nora Troppmann enjoyed through her early childhood and high school years.

Troppmann was born in 1996 and raised in Fairbanks most of her life before moving to Sacramento in July to attend ARC because she has family members who live here and the area provides more opportunities to play volleyball.

Troppmann discussed everyday life in Alaska and what she does and doesn’t like about her home state.

“(We would ride) snow machines,” said Troppmann. “My dad would fix them and we’d ride them on the frozen river and you could drive cars on it sometimes.” 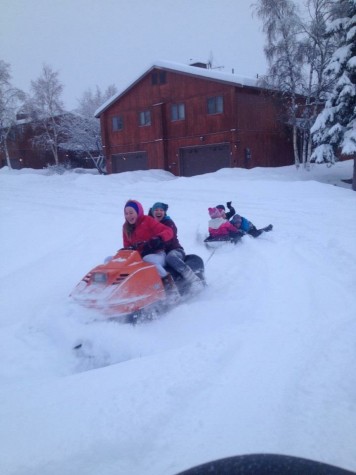 American River College volleyball outside hitter Nora Troppmann rides a snow machine with her friend and drags her siblings on a sled tied to the machine in Dec. 2011. Troppmann said this was one of her favorite activities to take part in while living in Alaska. (Photo courtesy of Nora Troppmann)

Troppmann said that the unique extreme weather can make the routine take much longer than normal.

“I have to start my car for half an hour,” Troppmann said on some of the daily challenges of Alaskan winters. “It can get 50 below, and it can get to 90 in the summer.”

Troppmann prefers the summer months to the winter, especially back home, saying that she enjoys the activities and wildlife and dislikes the extreme darkness and cold temperatures of winter.

Her family had lived in Sacramento previously from 2006 to 2010, where her father is originally from.

After moving back to Alaska during her 8th grade year, Troppmann started playing for a competitive team in Anchorage and would make the hour-long flight from Fairbanks every few weeks.

Troppmann recounted some of her favorite memories from the traveling team.

“We climbed a glacier as a team once,” she said. “We hiked a glacier on our way to a tournament.” 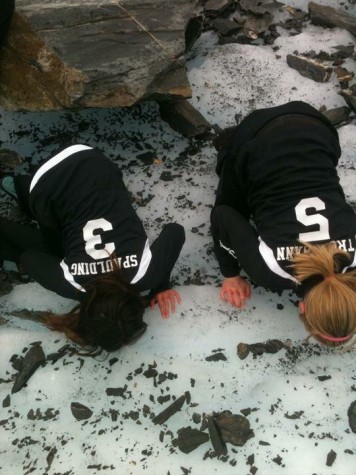 Nora Troppmann, right, and her teammate, left, drink glacier water during a team hike on their way to a tournament in Valdez, Alaska in Nov. 2011. Troppmann is now a freshman outside hitter for American River College’s voleyball team. (Photo courtesy of Nora Troppmann)

During her senior year of high school, Troppmann made the state all-tournament team and was MVP in one of the team’s matches.

Troppmann’s parents both attended a few classes at ARC during the family’s brief move to Sacramento in the late 2000s.

Troppmann’s mother, Lorinda, was born in the small Alaskan town of Nenana, about an hour from Fairbanks.

Her parents met in Crested Butte, Colorado while her mother was skiing and her father, Tim, was snowboarding.

Though Fairbanks is Alaska’s second most populous city behind Anchorage, only 32,324 people call it home, as of the 2010 census.

“I wanted to have as much playing time as possible,” she said. “I chose ARC after I spoke with (former head coach Ashlie Hain) and sent her video.”

Hain left ARC in the summer of 2015 to return to her alma mater UC Irvine, which Troppmann said left her confused.

“It was really confusing (because) I found like a week after I moved here,” Troppmann said.

Hain was replaced by Gabe Gardner, an Olympic gold medalist.

“It was definitely scary, but when I found out it was Gabe I was really excited to play under such a respected player,” Troppmann said.

Though she’s only been back in Sacramento for a few months, Troppmann has quickly bonded with her new teammates and coach, some of whom describe her as crazy and funny.

“She’s loud, she’s hilarious,” said Kaitlin Meyer, a teammate of Troppmann’s. “Definitely quirky, but she’s serious when she needs to be.”

Meyer said Troppmann is one of her closest friends. 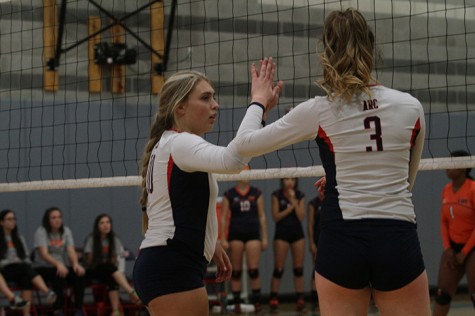 Kaitlin Meyer slaps the hand of teammate Nora Troppmann during American River College’s match against Cosumnes on Oct. 21, 2015. Meyer said Troppmann is one of her closest friends. (Photo by Nicholas Corey)

“Off the court, she’s the same as on the court,” Meyer said. “She’s always talking, keeping everyone up.”

Gardner said that he appreciates Troppmann’s willingness to be a leader.

“I’ve never met a young player with as much accountability for how she plays as I have Nora,” Gardner said.

True to the quirky form, Gardner said that he enjoys that she helps keep the atmosphere light while also making sure the team’s on the right track.

“She quotes to me what I say back to her,” Gardner said.

Troppmann said that she had to “recruit herself” to other places as the competition in Alaska is minimal.

“Unless you’re the best in the state and Gatorade MVP player of the year, you don’t really get noticed in the lower 48,” she said. 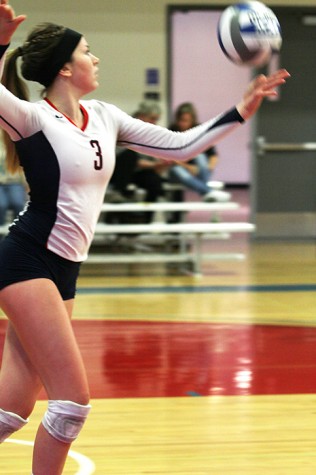 Troppmann currently resides with her aunt in Folsom, and though she misses her family back home she’s glad to be at ARC.

Troppmann enjoys the much warmer weather in Sacramento and the quick access to the beach and the mountains, but said that the culture was an adjustment.

“I like the heat. I dislike the drivers here. You guys don’t use blinkers, ride each other’s butts.

“It’s very diverse here. In Fairbanks, everyone knows everybody. Here people are more shy,” she said.

There are certain unique aspects of home, however, that Troppmann misses.

“It’s beautiful in Alaska,” she said. “I miss just driving and seeing a beautiful view everywhere I go. But it’s just a little too cold in Alaska for me.”

Troppmann’s ultimate goal with volleyball is to play Div. I or Div. II and then try to play professional beach volleyball around the world, but has a backup plan to be an ultrasound technician.

Troppmann said while she would like to transfer to a four-year school in California from ARC, she hasn’t ruled out returning home and attending the University of Alaska at Anchorage.

‘Farm to Fork’ does not represent Sacramento