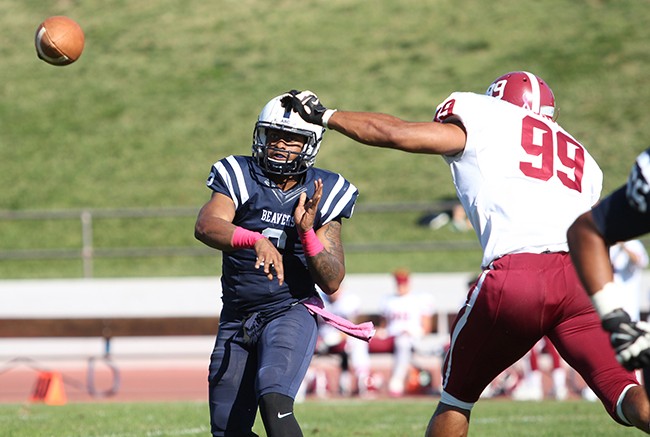 Being that ARC and Sierra are just under 14 miles away from each other, they recruit from many of the same areas. They face each other each year in a NorCal league matchup, setting up a faceoff between familiar foes.

Vercher, who spent last year as a backup at Sacramento State, benefited all game from having time in the pocket, setting up long throws downfield to an array of receivers.

“We wanted to show them what we’re all about,” said offensive lineman Austin Carlson.

Vercher was pulled with the game out of reach in the fourth quarter, and finished 14-26 with 257 yards and the four touchdowns.

Two of those touchdowns, the first and third, went to the team’s leading receiver Marc Ellis, who finished with 85 yards on four catches.

Sierra showed some offensive momentum in the first half, but ARC went into halftime leading by 11 due to an interception thrown by Sierra quarterback Cole Brownholtz, who finished with one touchdown and three picks.

Brownholtz was temporarily replaced by Kyle Cota, who led Sierra on two touchdown drives, but suffered an apparent leg injury on a successful two-point conversion run. Brownholtz came back in for Cota on the following drive.

When Brownholtz appeared to have hurt his throwing arm on a scramble later in the game, Cota came in for three plays, noticeably limping and unable to run. Brownholtz came back in to finish the game.

Each of Brownholtz’s interceptions were caught by a different ARC defensive back: in order, Robert Sanders, Chris Williams, and Josh Huston.

Williams said a point of emphasis for the defense was stopping Sierra’s passing attack, a strength of the team.

“We were dropping into coverages that (Brownholtz) didn’t know. We disguised them really well,” Williams said.

ARC team worked at NASA facility for ‘near space’ project