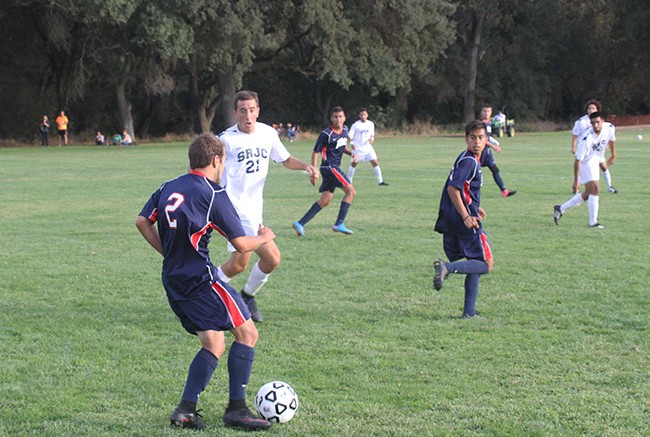 American River College men’s soccer team continues to struggle with its eighth loss this season to coming at the hands of Santa Rosa Junior College in a 3-0 loss.

ARC had a very strong first half, controlling the ball very well.

However, when it came to finishing its drives, the team still could not manage to score.

The team blamed a lack of unity and trust with one another on its struggles, as 24 of the 28 members of the team are freshmen.

“Even though these guys are young they still have a lot of experience playing, so there is no excuse as far as experience goes,” said freshman defender Ryan Kane.

The first half finished with some aggressive play from SRJC but ARC held them off and kept the game scoreless.

SRJC started the second half with a strong push upfield from its starting forwards and ended up making it far into ARC’s side of the field, but it regained momentum and started heading down field.

Addressing the team after the game, head coach Brian Hansen spoke on the lack of good play formation from the first half to the second.

SRJC was able to score to get a 1-0 lead at the 52 minute mark in the second half by forward Chris Ochoa with assistance from Roberto Garcia and Marco Barragan.

After the goal, some of ARC’s players attempted solo drives that ended up being shut down by SRJC’s defense and brought back up field.

“After we get scored on, we mentally break down and look for fault in one another,” said Rizzo.

ARC was scored on once more with a little over seven minutes to go in the game to seal it by midfielder Chris Huerta with assistance from Hernandez.

“We expected a tough game, but we also expected to win this one,” said freshman forward Ieann Vasquez.

ARC’s next game will be tomorrow against San Joaquin Delta College who is coming off a 3-0 loss to SRJC to drop them to 2-6-2 overall record.