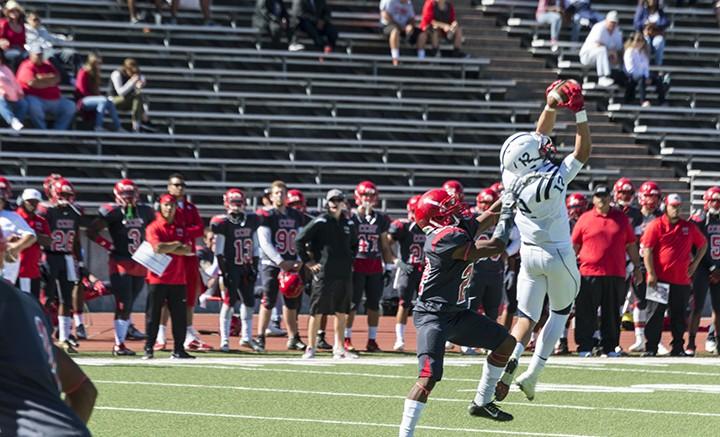 American River College wide receiver Jonathan Lopez goes up high to catch a pass during ARC's 20-17 win over City College of San Francisco at San Francisco on Sept 26, 2015. There were many similarities between ARC's 20-17 and its 17-14 loss to CCSF in the NorCal finals. (photo by Joe Padilla)

In last November’s NorCal Championship game, ARC lost at City College of San Francisco on a late fourth quarter field goal by a score of 17-14 as CCSF’s football team and the attending crowd went crazy in celebration, having moved on to the state championship.

This year in week four of the regular season, ARC went back to the Bay Area and returned the favor in a game with many similarities to the original, with the main difference being that it ended as a 20-17 win instead of a loss.

The former was in the second quarter and gave ARC its first first down of that drive, while the latter was a near-touchdown that put ARC at the CCSF one-yard line, and set up the game-winning field goal.

CCSF kicker Cristian Antezana missed two field goals and made one in both games.

ARC’s running game struggled for a majority of both games.

2014’s starter Deon Ransom, who was coming off of two weeks in which he had set opposing teams on fire for a total of 460 yards and five touchdowns, was kept to 27 yards on 16 attempts, an average of 1.7 yards per rush. 2015’s starter Armand Shyne had 13 rushes for 72 yards and a touchdown, with a well-above-average average run of 5.5 yards. But 63 of those yards came on his touchdown run, meaning without that breakaway he would have had 12 runs for 9 yards.

Both game-winning field goals were kicked on the north side of the field.

Last year, CCSF head coach George Rush was in the stadium coaching in his 38th season for the Rams. Rush has since retired and the stadium was renamed Rush Stadium after him.

The biggest differences are obviously the importance of the game and the outcome.

ARC would trade a NorCal championship win for a week four win in a heartbeat,but that does nothing to take away from the visible joy that head coach Jon Osterhout and his team felt when Sam Keil’s kick went through the uprights.

Rough start to season has ARC Baseball last in Big 8