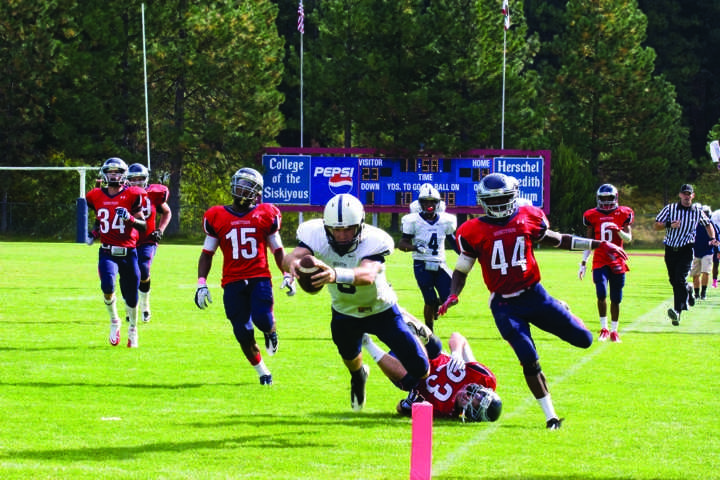 On Oct. 15, The Current’s sports editors Miguel Todd and Trevor Horn spent the day with the American River College football team and staff. Traveling 224 miles north to Weed, Calif. for their first Mid-Empire Conference game against College of Siskiyous, our writers got the inside scoop on what life is like for a traveling collegiate athlete.

4:30 a.m.—A figure I rarely get the chance to see on my alarm clock. Head coach Jerry Haflich and his staff put together a comprehensive itinerary spanning from 5 a.m. wake-up calls to arriving back at ARC at 9 p.m.

5:40 a.m.—With no trace of sunlight, players file into the gym for roll call. From there, everyone has 20 minutes to load two charter buses full of gear.

With players seated in pairs, placement is crucial, and comfort is the key. While some negotiate the terms of a window-seat trade, others demand two seats on size alone.

6 a.m.—Ignitions are turning in preparation for departure. One would suspect that a bus ride with a large group of athletes would be rather rambunctious, but this early in the morning, everyone is more concerned with catching up on some much needed rest.

8:30 a.m.—After a two-and-a-half-hour ride, which consisted of watching “Law Abiding Citizen,” half of “Rocky,” and limited conversation between players, we arrive in Redding for a pit stop. Upon exiting the bus, players are given eight dollars each to grab a bite to eat with. The resting point is a utopia of fast food restaurants. Everyone is given 45 minutes, then it’s back on the bus.

9:15 a.m.—The remaining hour and 15 minutes it takes to reach the campus flies by. We arrive at COS at 10:30 a.m. Coach Haflich is fully aware of the condition his team is after the long ride, so everyone is given 15 minutes to change and meet on the baseball field to warm up. After loosening up, Haflich yelled out to his players that they ‘We’re in God’s country, if that does kick your butt, I will!’

Players are given an hour to prepare mentally and physically. Once the clock strikes noon, it’s time for the positions to meet. Three-hundred-pound linemen go over blocking schemes in the parking lot, while special team players make their way to the football field.

12:30 p.m.—The entire team has made their way to Herschel Meredith Stadium. Encircled by a multitude of trees, and with a wondrous view of Mount Shasta in the distance, the Beavers begin stretching, warming up, and running pregame drills.

12:50 p.m.—After an inspiring prayer from Haflich, telling his players to ‘Not let someone take their dreams’ of an undefeated season, the team aligns themselves on the sideline for “The Star-Spangled Banner.” While a young female COS student performs her best rendition of our country’s national anthem, players try their best to contain the energy that’s been brewing for hours.

The Beavers jump out to an early 14-0 lead just minutes into the game behind a four-yard rushing touchdown by sophomore running back Bryce Pratt, and a 33-yard interception return for a touchdown by freshman defensive back Clifford Redmond. A 27-yard field goal from freshman kicker Bobby Reeves puts the team up 17-0 to end the first quarter.

With what looked to be the makings of another ARC blowout victory turned out to be anything but. A sub-par second quarter showing from ARC allowed COS the opportunity to get back in the game, only trailing 23-14 at the end of the first half. After a halftime that warranted a swift verbal kick in the behinds of his players from coach Haflich, ARC made its way back onto the field, with what seemed to be a completely different attitude than before.

Freshman quarterback Andy McAlindon, who is having a record-breaking season, had a modest day passing and was under tremendous pressure the entire game. COS tallied four sacks on McAlindon and a couple bit hits as well. But early in the third quarter McAlindon would exact revenge with a 48-yard run on a quarterback keeper.

Leading by double-digits late in the fourth, the team looked to be cruising toward another victory. But a late injury to freshman linebacker Samson Faifili left the team devastated. As he remained motionless on the field, surrounded by a medical staff for close to 20 minutes, his teammates waited in distress. As paramedics loaded him onto the gurney, Faifili threw up a shaka (the “hang loose” gesture) with his right hand, in place of the traditional thumbs up, ensuring everyone that he would be fine.

4:17 p.m.—As the game came to an end, with the final score 36-21, the Beavers shook hands, and made their way back to the locker room. The team would find solace in winning, but the health of their fallen teammate weighed heavily on their minds.

Following their showers, players turn in the dirty uniforms, receive a Subway sandwich and a Gatorade, and make their way back onto the bus.

5 p.m.—We depart from COS. With another win under their belt, and food in their stomachs, the undefeated Beavers make for an entertaining ride home, quite the contrast to the ride from earlier.

9 p.m.—We arrive back at ARC. The team is in good spirits, but exhausted from the long day. As players drop their gear off in their lockers, coach Haflich remains in the locker room congratulating players until everyone has left.

The victory over COS puts ARC at 1-0 in conference play, and still undefeated on the season.

Battle of the Burgers

Coach Haflich sounds off on this semester’s football team

Be the first to comment on "ARC’s Gridiron Gang: Current timeline of a traveling Football team"