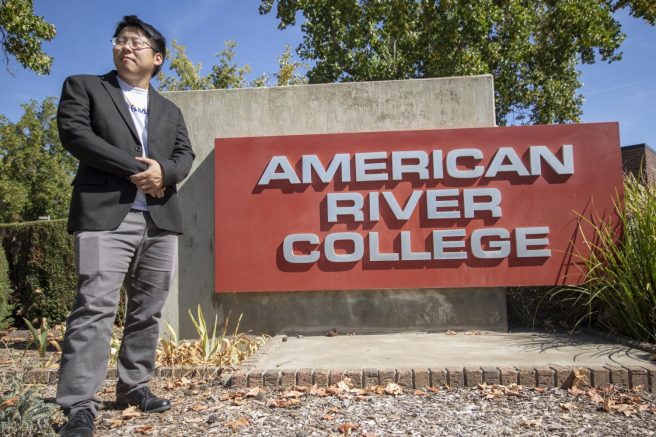 Phillip Kim, who is running for state senate, stands in front of the American River College sign on Sept. 27, 2018. (Photo by Ashley Hayes-Stone)

By Ashley Hayes-Stone and Jennah Booth

People shuffle, one behind another, through narrow doors into the stuffy cafeteria of Yuba City High School, taking their seats on rickety black fold-out chairs.

Tiny water bottles sat on the table awaiting the guests who would soon take their seats. A microphone lay in the center.

An American flag stands off to the side, another attempt to transform an otherwise typical high school into a suitable place for a California State Senate candidate debate.

A distinguished man appeared first. With gray hair, a perfectly tailored suit, Jim Neilson made his way to his seat at the brown table. Behind him came Philip Kim, ever Neilson’s contrast, dressed in a simple plaid shirt and jeans.

A former American River College student, Kim is running as the Democratic nominee for California’s State Senate against 4th district incumbent Nielsen. On Sept. 19, the two candidates participated in a debate held by Appeal-Democrat, a local news source for Sutter and Yuba counties, who also live streamed the event to their online viewers. Kim used the opportunity to publicly address his stances on free healthcare, implementing rent control and providing funding and free tuition for college students.

Republican incumbent Nielsen has held the Senate position since 2013; previously he served on the Senate off and on since 1978.

During the event, the panel asked questions about the two’s stances on several topics such as housing, immigration and their concerns about education, which Kim had a personal perspective on as a former ARC student.

“Our community colleges are awesome. I was taking music and recording classes at American River College a few years ago and the quality of education there was on par with, or better than the four year university that I went to,” Kim told the audience. “I think it’s an amazing system and we need to do all we can to ensure them financially and make sure it’s all funded.”

Before Kim found himself debating Nielsen for a seat on the California State Senate, he studied music at ARC.

“At first I just took a couple classes, but I really liked the [music] program and so I started taking more and more classes,” Kim said. “I got a chance to play in a lot of the different bands, the jazz band and the concert band.”

Kim belongs to two bands, the pop-punk band Red Hearts Bleed and the reggae band Vigilant Roots. Both are currently on hiatus while he campaigns.

In high school, punk bands like Bad Religion and Anti-Flag, which had a strong stance in political affairs, resonated with Kim and sparked his interested in politics, but it wasn’t until the tragedy of 9/11 that Kim really got involved.

“It wasn’t really until 9/11 happened when I was in college, that I got involved by protesting against the Iraq War. I saw how the public was manipulated to go to war,” Kim said.

His involvement in political justice continued throughout his life and into his time attending community college. While attending ARC in 2015, Kim became involved with the Bernie Sanders campaign in Sacramento because he found that his political views aligned with Sanders.

From there, Kim worked as a community organizer for the Medicare for All campaign, which has since become his day job when he’s not campaigning.

“The campaigning I’m doing is on the weekends and in my spare time, but I don’t have the luxury of being able to quit my job to campaign full time,” Kim said. “I’ve taken very few donations. Just enough to pay for flyers, but it’s very much a guerrilla, grass-roots campaign.”

Kim’s work paid off in the primary midterm election when he won over 42,000 votes, making him the top winning Democratic Socialists of America vote getter since 1996, despite running in a long shot, right leaning district.

“It’s inspiring that over 42,000 people support a progressive, working-class agenda by voting for me,” he said. “Even when it’s a long shot, you have to run progressive candidates to build the movement and try to win.”

Now, running on a democratic socialist platform much like Sanders’, Kim says he believes in Medicare for All and strongly supports Senate Bill 562, or the Healthy California Act, in his venture for a senate position.

“[SB562] would create a medicare for all system, that would guarantee healthcare for every resident of California,” Kim said. “This would be a cheaper and more efficient and more humane system than what we have now.”

SB562 would combine all forms of federal medical aid into one fund and the difference would be made up through taxes, according to Kim. “So it’s true that our taxes would go up but it would replace the huge insurance costs that right now individuals and employers are paying,” he said.

Nielsen however, disagreed during the debate.

“Single payer will bankrupt us. What did Obama-Care give us? Higher premiums, diminished care. It did not solve the problem,” he said.

Instead, Nielsen said he believes California should focus more on making it easier for nurses and doctors to work.

Many questions asked during the debate touched on the recurring topics of homelessness, rising rent and housing costs in California. Kim and Nielsen offered  different opinions on what role the government should play in California’s housing crisis.

The Democratic nominee strongly advocates for Proposition 10, which would repeal the Costa-Hawkins Rental Housing Act. Enacted in 1995, it places restrictions on local governments and cities to pass certain types of rent control. With the Costa-Hawkins repealed, Kim said he feels that it would give power to local governments to handle the housing crisis in their cities.

“By repealing Costa-Hawkins, cities would be able to decide, ‘hey do I want to control the rents in a reasonable way,” Kim said. “And it would still allow the landlords to make a profit but it has to be reasonable.”

Nielsen’s views contrast Kim’s in that he believes that government regulation itself is at fault for the skyrocketing rent and housing costs.

“Housing costs are crazy and off the line in California because of government regulations,” he said. “A new imposing of almost $10,000 on every new home in California for solar. What’s that going to do for the cost of housing? Make it better? No.”

When it came to the topic of education, Kim suggested that full funding and adopting the European model of free college is the answer, while Nielsen referenced his previous work in education as a reason why he is the best candidate for community college students.

Over 44 million Americans hold nearly $1.5 trillion in student debt, according to CNBC. As a former student himself, Kim witnessed the skyrocketing increase of student debt with his friends.

“The student debt crisis is getting pretty crazy. A lot of my friends have tens of thousands of dollars worth of debt, which they’re struggling to pay off because there’s a lack of decent paying jobs also,” Kim said.

The panel asked the candidates about their concerns regarding grade schools and higher education at the debate. Nielsen said that public education needs to be held accountable for low test scores, not more money, and that reducing testing was not the answer.

“As far as higher education is concerned, I am the author of the review of the Master Plan of Higher Education that defined the missions, goals and interrelationships of the three levels of higher education that was done in the 1980s,” he said. “The greatest beneficiary of that review and the reforms that we put into effect afterwards were [community colleges].”

One thing both candidates agree on on is that more young people should be involved in politics, both encourage young people to take an interest in their government so they can make a difference for themselves.

“I think it’s super important for young people to get involved, otherwise these wealthy corporate interests are making decisions for us and they don’t really care about the people, they care about making a profit,” Kim said.

Nielsen encouraged young people to consider many sides of an argument and the authenticity of a candidate.

“[S]tand up and vote. I would hope, that however you vote, you would vote for someone who is candid and honest … Too many do not do that,” he said to the Current. “I would encourage the students to get involved and be informed and consider many opinions.”

Kim’s is running for senate as a part of what he calls “the revolution,” a fight for reform of the government, society and quality of life in the United States.

“The revolution is people getting involved and taking back control of their government and having a decent society where healthcare and housing are provided for and people can work a decent job and be able to retire with dignity. That for me is the political revolution,” he said. “I want a more decent and fair society and economy, where we’re not having to just work all the time, because there’s more to life than work.”

After ‘the revolution’, Kim said he’d like to get back to the music he had supported at ARC. “In a more just society I would be playing more music, and maybe not even being involved in politics,” he said, but until then for Kim, there’s work to be done.

“For me, Socialism is creating a world more like Star Trek,” he said. “And what we’re fighting against [are] these republicans and corporate interests that want to turn it more into the world of Mad Max.”