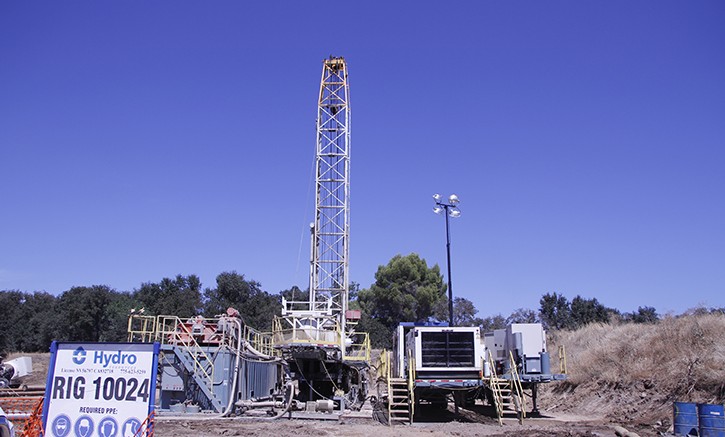 Hydro Resources, a water-drilling company out of Reno, Nevada, began drilling early this semester as ARC moves to replace one of it's two existing wells. The well being replaced "includes amounts of sand, which clogs filters and creates a need for water equipment repairs,” said ARC public information officer Scott Crow. (Photo by Kameron Schmid)

By Kameron Schmid and Iris Page

A three-phase project to replace one of American River College’s two water wells is underway, and is expected to take no longer than the fall semester, according to multiple sources at ARC.

Establishing the well will involve two separate companies and was deemed necessary after it became apparent that the existing well began to “show signs of failure,” said Dan McKechnie, the director of administrative services.

The drilling needed to make a new well began on the east side of campus by the sports fields, and was done by Hydro Resources, a water-drilling company out of Reno, Nevada.

According to ARC’s public information officer, Scott Crow, the new well is being installed as a preemptive measure before the existing well completely fails.

“The water (from the existing well) includes amounts of sand, which clogs filters and creates a need for water equipment repairs,” said Crow.

The first stage is the initial drilling, which Crow said was not anticipated to go beyond 400 feet underground. According to McKechnie, about 80 percent of stage one is finished.

When drilling a well for water, an initial borehole is drilled and then the sample is examined for sand and gravel.

Sand and gravel have the degree of porosity – the measure of how much of a rock is open space – that is ideal for water extraction.

Stages two and three encompass making lateral connections that are used to supply water throughout the campus, and building the top side of the well which includes pumps and filters.

Wood Rodgers, a civil engineering group based out of Sacramento, is the external contractor who will design the well and associated systems, as well as oversee the project.

Perry McMahon, the project manager for Hydro Resources, said there has been a 100 percent increase when asked if there has been a change in the business his company has done in the central valley during the last few years.

In the current drought, one as severe as California has ever encountered in recorded history, drilling for groundwater has undergone a massive uptick in frequency.

There are multiple stories about drilling companies who have never been busier due to the increased need for groundwater as the drought continues, but most new wells being installed on farmlands or agricultural facilities are at least 1,000 feet underground, or even more.

Compared to those numbers, ARC’s new well will seem old-fashioned at just 400 feet below the surface.