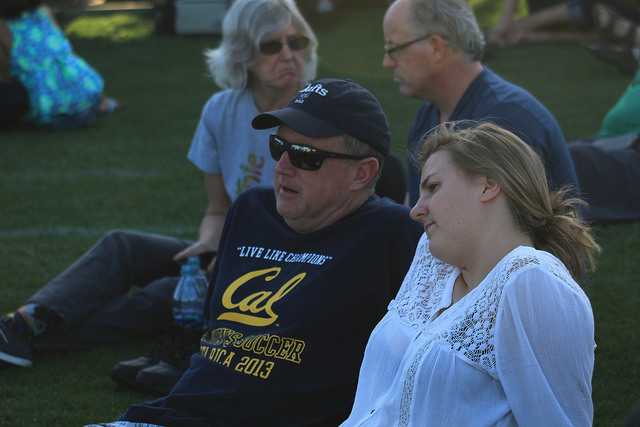 Kevin Bell (left) and Brigid Bell (right) sit on Bonney field at Cal Expo waiting for Bernie Sanders to give his speech at his "A Future to Believe In" rally on May 9, 2016. Brigid is a first time voter who hopes her undecided father chooses Sanders.(Photo by Robert Hansen)

In the crowd of thousands waiting in the bleachers and on the lawn for Bernie Sanders to speak at his rally in Sacramento on Monday, many young voters came out with their parents to hear the presidential candidate speak.

This election season, some of the younger voters are getting older voters to “feel the Bern.”

First time voter and high school student Brigid Bell, who was sitting on the lawn with her father Kevin, hopes she’ll be voting for Sanders in November.

“I like the grassroots movement,” Bell said. “Everything he says about more affordable education is why I like Bernie.”

Her father Kevin Bell, who said he has “always been” a Democrat, is still undecided and said that he does not like the choices he was given this year for president.

“I don’t know what to do,” Kevin said about the election. “This whole election has been disappointing.”

“I may become a fan tonight,” Kevin said.

Lynne Mayes said she was for Hillary until her daughter swayed her.

“Well my daughter keeps talking about Bernie so much and I like what he says about education,” Mayes said. “I was with Hillary because of the woman thing but because my daughter is a student, I’m pulling for Bernie.”

Tina Cameron and her daughter Shelby drove five and a half hours from Bakersfield to see Sanders.

“I like everything he stands for,” Cameron said. “But I still haven’t made up my mind.”

Cameron said that her daughter is not letting up on getting her to vote for Sanders.

“I’m still a little torn being a woman, although my daughter is pro-Bernie,” Cameron said.“(But) she is doing a good job of changing my mind.”

Rachel Clark, who had been waiting in line since 2 p.m., said her daughter Tessa was the reason for supporting Sanders.

“When (Tessa) showed me his history in activism and everything he has done his entire career for human rights, that did it,” Clark said. “I had no idea that he’s been doing this since the (1960s).”

Tessa was in full Bernie gear as she waited with her mother and friends.

“She used to be a Hillary supporter,” Tessa said. “(He) just bought her a Bernie hat.”

Your culture or mine? : Analyzing the misuse of sacred cultural items