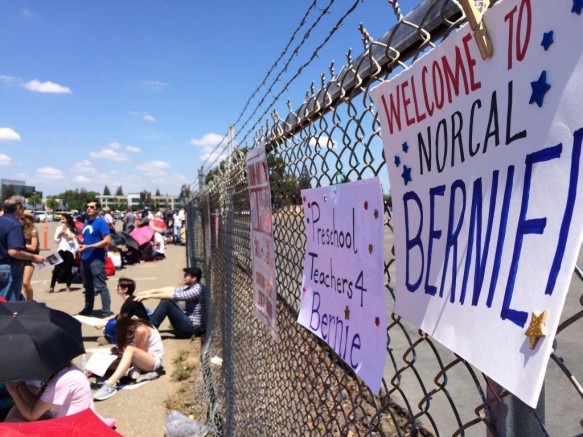 One of the many signs brought to the Sacramento Bernie Sanders rally hangs along a fence in front of the line forming at Bonney Field in Cal Expo. The line started forming around 8 a.m. and the doors open at 5 p.m. (Photo by Hannah Darden)

A previous version of the photo caption incorrectly labeled Bonney Field as Bonnie Field. The caption has been updated to reflect the correct spelling.

By Jordan Schauberger and Robert Hansen

A “not for sale” chant could be heard amongst the hundreds of Bernie Sanders supporters lining up at Cal Expo for tonight’s rally.

The line started forming around 8 a.m. and people from all over northern California came to participate in Sanders’s “A Future To Believe In” rally.

Angelina Ximenez, a psychology major at American River College, said that Sanders is the best option since “America has gone to shit” and she “loves” his stance on education.

“I’m not 100 percent for free college, but we need more funding,” Ximenez said. “I have so many professors who say their funding is too low.”

Konocti Educational Center high school student Lacey Amaral, who plans to transfer to ARC in the fall, also believes that his education policies are the most important.

“As a student, I love that he wants free college,” Amaral said. “A lot of my friends are choosing not to go to college because they can’t afford it.”

Several waiting in line expressed excitement that Sanders was going to be in Sacramento.

“I freaked out when I heard he was going to be in Sac,” said Michelle Stewart, a Sacramento State University student who transferred from ARC this semester. “I was not going to miss this.”

Jessica Foster did not vote in the last presidential election but this time she finally saw a “candidate (she) trust(s).”

“He’s giving us a chance to matter,” Foster said. “Before I saw Bernie, I thought the whole (political) system was bull.”

Steven Robinson, who’s also a first time voter, is “all about Bernie.”

“I see truth and honesty in him,” Robinson said. “I like his anti-corporation ideas.”

Tessa Clark is another voter who registered for the first time because of Sanders.

“Win or lose, he’s started something that’s not going away,” Clark said.

Doors open at 5 p.m. and Sanders is scheduled to speak at 8 p.m.

Students resurrect the smash on campus