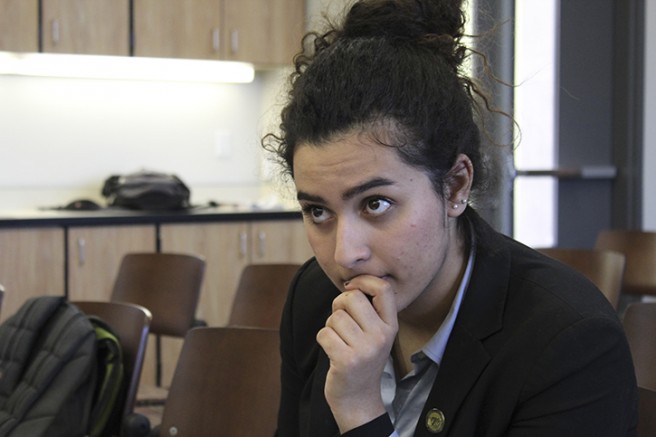 SSCCC President Dalhia Salem listens to board discussion at an ARC Student Senate meeting in late March. Salem was one of the proponents for Advocacy in April after the originally scheduled March in March was cancelled. (Photo by Robert Hansen)

Advocacy in April, an event organized to support community college student leaders by engaging in legislative visits at the Capitol building, was canceled by the Student Senate for California Community Colleges (SSCCC).

An email was sent out today by Naeema Kaleem, the SSCCC secretary.

“Due to the lack of participation & RSVPs from folks across the state, the Student Senate Council voted unanimously today to cancel the upcoming Advocacy in April event this Thursday, April 21st.”

As of Friday, less than 10 people had signed up for the event through the Eventbrite link that was advertised multiple times, according to the email.

Advocacy in April was set to replace March in March, an event made permanent in the fall 2015 SSCCC General Assembly.

The SSCCC has already been accused of intentionally abandoning March in March by the region two council, chaired by Christopher Recouvreur.

“When we look at the facebook chats in that report, it does leave a bad taste,” Recouvreur said on March 31. “Because they’re talking about having a carbon copy of this event (Advocacy in April) instead of March in March and that’s what happened.”

President of the SSCCC Dahlia Salem has maintained that the event was really only effective after the 2008 recession and southern schools have a difficult time making it to Sacramento.

“They (SSCCC) felt there wasn’t a purpose for it anymore,” Salem said. “The March in March, when it was most effective were during the budget cuts of 2008, ‘09.”

On March 31, Advocacy in April was presented to ARC’s Student Senate by Salem, giving them three weeks to RSVP to the event.

ASB President David Hylton, who planned on attending, was not surprised the event was canceled.

“I think it looks bad in lieu of that and the cancellation of March in March,” Hylton said in an email.

“I knew Advocacy in April was going to fail because they depleted their political capital cancelling March in March.”

Hylton also said why he thought there was such little support for the new event.

“I think early April might be fine but I’d have to see what class schedules look like,” Hylton said. Late April you run into students studying for finals.”