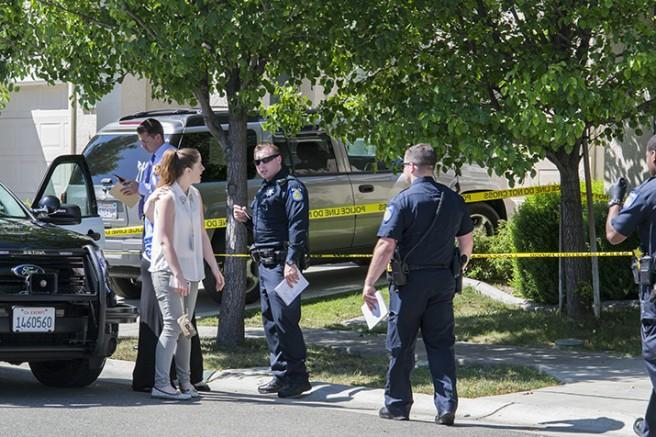 Police talk to local residents at the site of a shooting in Natomas on April 18, 2016.The shooting injured one man and caused the lockdown of nearby Merryhill Preschool. (Photo by Joe Padilla)

An altercation broke out between two men in a Natomas home around 10 a.m. Monday, leaving one with multiple gunshot wounds and causing a lockdown of nearby Merryhill Preschool according to the Sacramento Police Department.

It is suspected that the victim and suspect know one another and that the altercation may have some drug-related element to it.

“Further investigation into the circumstances of this instance would reveal that this was not a random act, it is an isolated incident and likely the suspect and victim knew each other,” Sacramento police officer Matthew McPhail said.

After the victim had been shot he ran out of the home and went to a neighbor’s house to call police.

“Our victim fled to a neighbor’s house in the area, left his home after the incident, and ran to a nearby location to solicit help from a neighbor,” McPhail said.

When police had arrived at the home they found only the victim in the home, set up a perimeter around the neighborhood and began searching for the suspect, according to police.

The victim was transported to a medical facility and is expected to survive his injuries, according to police.

Nearby Merryhill Preschool was put on lockdown in response to the shooting.

Children and Merryhill teachers were on the south end of the school when police entered the neighborhood.

“I was very scared when I looked up and noticed the police officers jumping out of their car with guns. There were at least five officers with large guns. They yelled at us to get the children indoors immediately,” Merryhill teacher Katrina Marie said.

Children ranging from 18 months to 5 years old were outside as the incident took place. Each child was accounted for by a staff member and went into the school immediately.

“I heard the police driving around for about five minutes before we were told to go on lockdown. I was enjoying the playground with my students and then noticed a bunch of officers with guns. We stayed very calm and gathered the children and rushed inside,” said Monique Gammon, a teacher at Merryhill.

California Highway Patrol officer Matt Sanchez, who has a child attending Merryhill, stopped in during the lockdown to make sure things were safe inside the school.

“I wanted to make sure my son was safe so I came here to check things out. I don’t know any other details into what happened besides what is already publicly released,” Sanchez said.

The lockdown on Merryhill was lifted at 11:40 a.m.

Police do not currently have anyone in custody but are still investigating the incident.