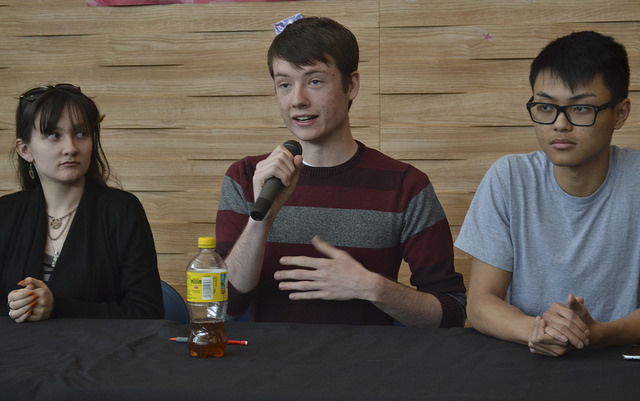 CAEB President Justin Nicholson discusses why he should be re-elected during the candidate forum for Student Senate and CAEB at American River College. All candidates for both boards are running unopposed. (Photo by Sharriyona Platt)

Eight candidates are all running unopposed for positions in the American River College Associated Student Body Student Senate and Clubs and Events Board (CAEB), and the forums for candidates were held Tuesday and Wednesday.

The forum gave the candidates a chance to speak and answer questions directly from ARC students.

Each of the candidates shared with students how they would serve ARC students as members of ASB.

Valencia Scott, who is running for Senate President, shared with ARC students which issues she feels are most important.

One of the issues Scott discussed was the right of free speech, which has become more of an issue on campus due to the recent visit of an anti-abortion group.

“I think it’s important to acknowledge and allow the practice of free speech,” Scott said. “Mental health, hunger, and homelessness are probably the three biggest issues on this campus.”

“ASB is a representative mechanism for smokers and non-smokers, so it’s important that we create a space for people to smoke on campus,” Scott said.

Senate vice presidential candidate Alejandra Hillbert said that there can be more done to increase student participation in ASB and campus activities.

“We would like to create flyers or announcements so that everyone has accessibility to ASB,” Hillbert said. “I think there’s a lot of opportunities and activities on campus, but they aren’t very visible to students.”

Running for director of finance, Kevin Phan is working toward a degree in business administration and feels that is one of his best qualifications for the position.

Nicholson has five years of experience in student government both at ARC and in high school.

According to Stedman, she and Nicholson have also developed a strong relationship over the past year to help better CAEB as President and Vice President next year.

Both agreed that more mental health services were needed on campus.

“I actually do believe that we need mental health services on campus,” Stedman said. “We need to show students that we want to help.”

Lopez would be a first-time senator and reached out to students hoping to be elected.

“I ask here today that you, the students of American River College, place your faith in me,” Lopez said. “To represent student issues and concerns. Good judgement, dedication, integrity, charisma … are values close to my heart.”

Garner is a returning senator who was appointed to the board in February and also addressed free speech.

“I feel like I’m the best choice because of the experience I have from being on the Student Senate,” Garner said.

“They have the right to practice free speech, but they have to respect the student’s wishes and not harass them.”

Jones, a long time member of ASB, addressed her alleged skepticism of the holocaust.

“I know there’s a letter to the editor in the Current saying that I denied the holocaust, which is not true,” Jones said.

Student awareness and involvement are areas where Jones would like to see improvement.

“Student Senate doesn’t have any place to post their announcements,” Jones said. “Even my high school had those flashing message boards.”

“We can’t give you free food for voting in the election, but if you fill out the survey, there’s some free food involved,” Jones said.

Stedman suggested students visit the Center for Learning and Development.

Lopez told students that attending an ASB meeting would be helpful for any student who wanted to know more about their school.

Election days are upcoming, on Tuesday and Wednesday of next week. Voting is online through eServices from 7 a.m. to 11:30 p.m. each day.

Up in smoke: the last days of the ban on marijuana

Be the first to comment on "Candidates, all running unopposed, speak at forum as campaign period begins"