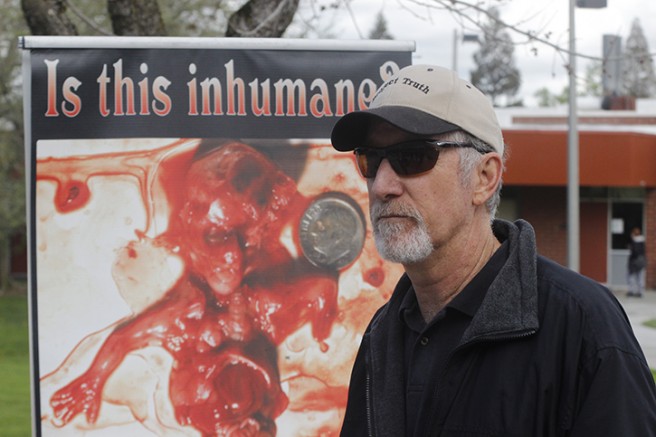 John Edgar, a member of the anti-abortion activist group Project Truth, stands in front of one of the group's signs posted by its set up near the Student Center. Project Truth visits college campuses among other venues across the country to spread its message. (File Photo)

An anti-abortion group that refers to itself as “Project Truth” visited American River College Monday to discuss its feelings on the subject.

The group goes to college campuses all around the country, handing out flyers and engaging in conversation with students passing by.

“(We) talk to students about our group and to talk about the injustice of abortion,” according to Project Truth member Ed Whitfield.

“We usually get a good response, depending on the student,” said Whitfield. “We’ll have a lot of discussions about whether they think it’s right.”

William Wilberforce, a Project Truth member, called the continuous act of abortion in the U.S. a holocaust.

“57 million babies, that’s a holocaust,” Wilberforce said. “57 million pre-born babies, human lives have been snuffed out under this idea of choice. Even the Germans called it choice, they thought it was choice to get rid of what they called parasites.”

Jorge Riley, a member of Project Truth and an ARC student, said “I think we’ll see with technology that abortion is this day-in-age’s version of slavery’s evilness. … It’s irrefutable to say that they’re just blobs of skin.”

Bud Reeves, another member of the group, interjected on Riley’s comment to add more.

“Roe v Wade made these little people in the womb property of the state that can be disposed of, like slavery,” Reeves said. “We (have this discussion) civilly and we’re winning. America is moving more and more toward gaining respect for human life.”

Added Reeves: “As Dr. King said, if we allow injustice anywhere, it can go everywhere, and this is an injustice.”

Many students walked by the set ups and some took flyers, which were located in front of the library and near the Student Center, but less actually stopped to talk with members of the group.

George Coon, an ARC student and father of three, said he didn’t understand why it was necessary for the group to come to a college campus.

Coon had only stopped to view the signs, but didn’t take a flyer or engage in any discussion with the group.

“I feel like displaying these images in the middle of campus are disrespectful to the students and the learning environment,” Coon said. “If they really want to be efficient with this, they should display it at an abortion clinic, outside of a courthouse, outside of a polling place.”

Coon said that while he agrees with the group’s right to express its right of free speech and that the subject is “tough,” he believes a college campus isn’t the right place.

“You know there’s some girls that may have done this, and it might really mess up their day,” Coon said. “I got three kids of my own, and I know people who’ve done it. And it’s very hard, to live with that choice, and then have kids later.”

According to Whitfield, the biggest outcry the group typically sees is in response to the pictures that it posts around the set up.

“These are really gruesome, awful pictures,” said Whitfield. “They can express so much.”

Added Whitfield: “They see (the pictures) and say ‘wow, I don’t want to do that.’ So pictures show a lot.”

John Edgar, another member, said the conversations with students can go many different ways.

Several members of the group said that while it doesn’t happen often, conversations can sometimes go awry.

“Sometimes they’ve gotten violent, where they try to knock down our display, or shout or spit at us,” Edgar said. “We actually had a professor on this campus that threatened to tear down our display, and actually encouraged his students to do it.”

Rose Galloway, an ARC student, is pro choice and engaged in debate with one of the Project Truth speakers before going to her next class.

Galloway said that while she personally doesn’t “know a lot of struggle,” she still believes it’s up to the person what they want to decide.

“I’d rather not have a kid if I knew I was going to be a bad mom,” Galloway said. “But this (the brochure handed out by the group) isn’t going to change my opinion.”

Jordan Schauberger and Trevor Haynes contributed to this report