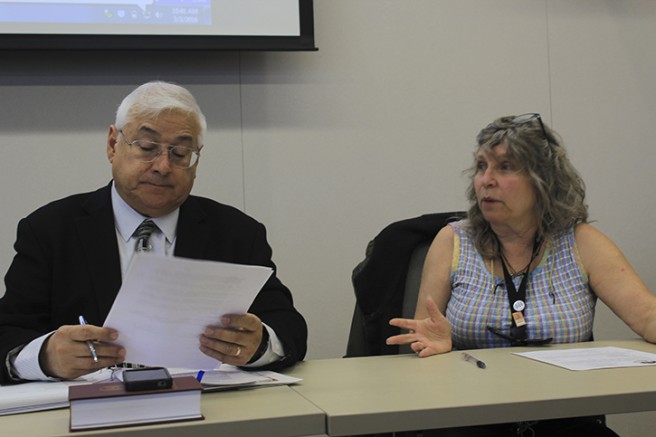 Cuesta, who is a member of the National Association of Parliamentarians, works all over the state assisting boards of directors, colleges and special groups on how to follow its own bylaws and procedure.

“Maybe the wording he should use or beware of certain things…I’m there to assist not insist,” Cuesta said. “I’ll tell them, your law says this, your rules are this, ‘Robert’s (Rules of Order)’ is this.”

Robert’s Rules of Order refers to a book that acts as a guide for running meetings and making group decisions.

Cuesta was hired by Student Senate to aid the board in running more efficiently and sits next to President David Hylton II during the meeting.

“I have three pages of comments on everything they did,” Cuesta said. “And he may not like some of the thing(s) I’m going to say… but they were petty.”

Cuesta mentioned one thing that bothered him was the arrangement of the chairs because it leaves Hylton unable to recognize senators wishing to speak.

“He was having trouble recognizing people, and that’s serious,” Cuesta said.

Cuesta is contracted to assist the Student Senate through the end of the semester.

The Student Senate will amend a bill that will support Phi Theta Kappa’s (PTK) fundraising banquet so that it does not go over budget this semester.

“I love your guys’ cause,” Diefenbacher said. “However, I would recommend that we use these funds at discretion… we don’t want to liquidate that account. We need to use those funds for things that come up and we still have elections.”

CAEB President Justin Nicholson wants to fully support Phi Theta Kappa as much as possible, saying that this is a great opportunity for advocacy and for students to benefit themselves.

“I know we shouldn’t liquidate the account,” Nicholson said. “One thousand dollars is a significant portion of that but I would be inclined to attempt to support them with everything that we got, it’s the right thing to do.”

Adviser Juan Blanco warned how this could affect the senate in future semesters.

“We don’t want to set the precedence for this to continue,” Blanco said. “We’re not the bank of ARC.”

The amount of the bill was initially set at $1,000, but the board will lower that amount and vote on it next week.

A bill was passed at yesterday’s meeting allocating $400 to purchase food and items to giveaway to students during Beaver Week, which is scheduled April 12-14.

The senate appointed another member, Zach Perry, to the board.

Senate also discussed a resolution at today’s meeting to oppose the Regional Transit fare increase that would take effect on July 1. Action is to be taken on this item next week.