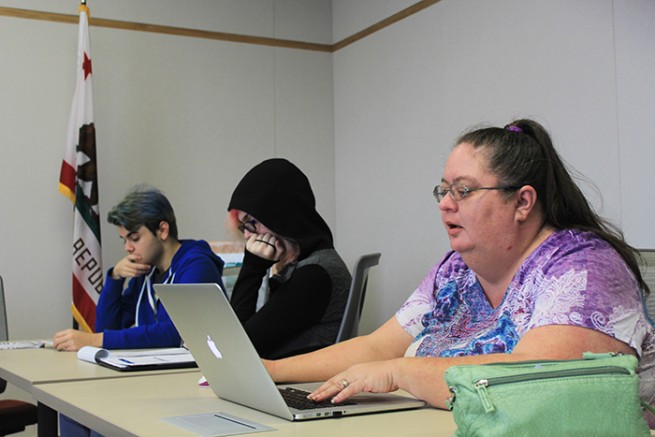 Director of Communications Tami Dunning reads the Senate agenda for Thursday's meeting. The board was unable to complete an agenda item to pay a six-year-old Aramark bill, so they held a special meeting on Friday and payed the outstanding balance in full. (Photo by Robert Hansen)

American River College’s Student Senate passed a bill to pay $1,241 to Aramark for catering the 2015 Fall Leadership Summit, during a special meeting Friday.

Senate called the special meeting because they were unable to pass the bill during previous meetings.

The inability to get the bill passed had left the invoice unpaid for six months, according to Director of Finance Jeremy Diefenbacher.

Originally, the bill covered an amount of $300, which was ARC’s portion for the Fall Summit.

Cosumnes River College, Sacramento City College and Folsom Lake College paid ARC and ARC was then to pay the entire invoice of $1,241, according to Director of Legislative Affairs Laurie Jones.

“Originally we thought we were just going to pay our part,” Jones said.

CAEB President Justin Nicholson acknowledged the importance of making sure the invoice was paid.

Both students successfully argued their case before the board and explained how they would be an asset to the Senate.

Garner suggested creating smoking lounges as he has seen smoking sections at the other colleges in the Los Rios school district.

“I’ve seen first-hand from Folsom Lake Community College, Sac City and CRC they got designated smoking areas so, I would like to see that changed,” Garner said.

Drake is a returning member of the senate after having to withdraw from her position last semester due to ineligibility.

Drake is now eligible and is thankful for another opportunity to envolved with the student senate.

At the beginning of the meeting, the board observed a moment of silence for world peace and campus safety.