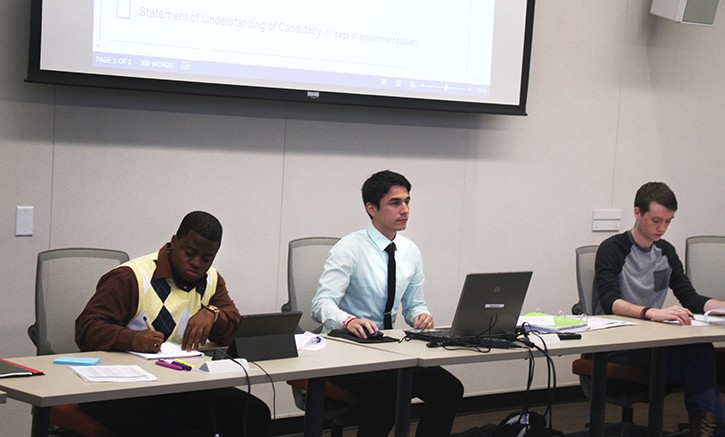 Associated Student Body Senate Vice President Samuel Kinsey, left, President Garrett Kegel and Clubs and Events Board President Justin Nicholson call the first Student Senate meeting of the semester to order. Senate and CAEB are slowly filling the boards that were mostly vacant at the start of the semester. (Photo by Matthew Wilke)

The Associated Student Body has appointed members to both the Clubs and Events Board and Student Senate as they continue to find their footing to start the year.

CAEB swore in Mary Stedman as vice president, which brings the total leadership board to three students.

With five positions still vacant, CAEB President Justin Nicholson mentioned that he has received several packets and hopes to be filling out the board’s “skeleton crew” soon.

Student Senate has had more luck filling out their board and, as of Thursday, has appointed four new Senators.

ASB has, as a whole, unanimously endorsed the universal transit pass Measure A. The measure will increase the fee students pay for UTP to $2.10 per unit, capping at 15 units.

The board approved to allocate $300 to print business cards for the Senate members.

“Business cards are the best form of advocacy that we can have,” said Tamara Dunning, who acted as ASB student senate president last year.

The board also allocated $300 a piece to fund the printing of bike locker forms and advertising for the Measure A vote on the universal transit pass to encourage students to vote yes. Both bills passed by a vote of 4-1.

“I think that things are being done out of order,” said Sen. Jones, who voted against both bills.

“I’m not against what the bills are doing, but we need to find out how the Joint Budget Committee (JBC) is going to divide funds between Student Senate and CAEB before we approve to fund these bills,” she said.

The board approved a resolution in response to 138 reported crimes on campus between January and March 2015.

The resolution calls for education on crime and sexual assault prevention, implication of more technology, allocation of resources and collaboration between the ASB and administration.

CAEB is planning a Club Day for September 24 that will have a “Let the Games Begin” theme.