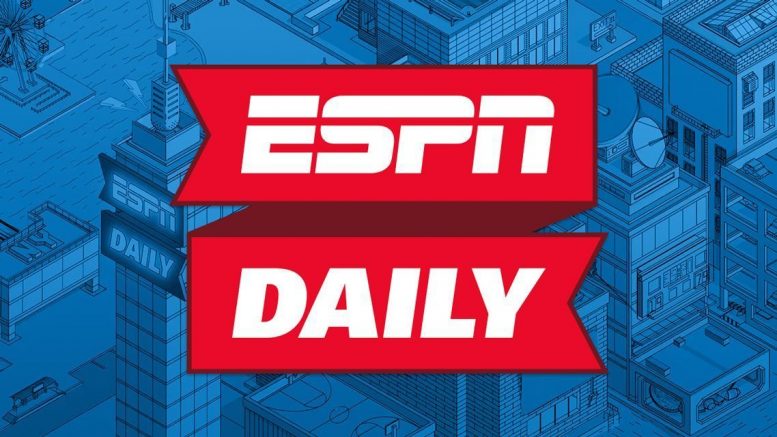 With sporting events canceled or suspended due to coronavirus concerns, multiple sports podcasts such as ESPN Daily are filling the gap during the unknown hiatus. (Photo courtesy of espn.com)

With the coronavirus outbreak cancelling or suspending most sports, here is a list of sports podcasts to get your sports fix during the hiatus. This list includes podcasts that cover the NFL, NBA, MLB and some that cover multiple sports and can be found on Spotify, Apple Podcasts and other places that podcasts can be found.

“ESPN Daily” comes out every weekday and covers the hottest sports topics of the day. This podcast includes major stories from multiple sports and is usually around 20 minutes long per episode. Mina Kimes is the host, but she also has guests who are involved in or cover the topic that is being discussed that day.

“All the Smoke” is hosted by former NBA players Matt Barnes and Stephen Jackson. During each episode they welcome a new guest, usually current and former NBA players, and give their unfiltered takes on their careers, the game of basketball and much more. Each episode is anywhere from one to two hours and a new episode is usually released every week.

“Through the Wire” is hosted by four friends from Chicago, one of whom is a successful Youtuber. The podcast covers all things NBA. Discussion topics include position rankings and how teams and players are doing throughout the season. “Through the Wire” has become one of the top basketball podcasts and is now featured on Bleacher Report and House of Highlights. A new episode is usually released every couple of days and typically lasts around 50 minutes.

“Jalen & Jacoby” discusses all the latest topics in sports and also discusses things that are happening in pop culture. It is hosted by David Jacoby, a commentator and senior producer for ESPN, and former NBA player Jalen Rose, but they also sometimes bring on guests. New episodes are released almost daily and usually last around an hour.

“Inside the Green Room” is co-hosted by journalist Harrison Sanford and Danny Green, a current NBA player for the Los Angeles Lakers. The podcast also features new guests every episode. This season, most episodes are about the Lakers and how their season is going. Each new episode usually comes out about once a week and lasts around an hour.

“The Adam Schefter Podcast” comes out once a week and is usually anywhere from 30 minutes to an hour. The podcast discusses all the top stories in the National Football League and is hosted by Adam Schefter, one of the NFL’s top newsbreakers. He is usually joined by another analyst or someone else involved with the NFL, usually a general manager, coach or player.

“Baseball Tonight” is a great podcast for anyone who likes baseball. The podcast covers all the biggest stories around baseball and also previews every division within Major League Baseball in the offseason. There are new episodes almost daily and each episode is around 30 to 40 minutes.

“The JJ Redick Podcast” is hosted by NBA player JJ Redick and features different guests every week. Redick discusses his career and also has other players on to discuss their careers as well. There are new episodes almost every week and each episode lasts anywhere from an hour to an hour and 30 minutes.

“The Mina Kimes Show” covers all things football and major stories in the NFL. Mina is usually joined by a different guest every episode. There is usually a new podcast every week, sometimes more, with each episode around an hour long.

“Ledlow & Parker” covers all things NBA and there is usually a new episode every week. Each episode lasts around 40 minutes and is hosted by NBA sideline reporter Kristen Ledlow and WNBA player Candace Parker, along with a guest that joins them for each episode. The podcast also discusses WNBA and college basketball in addition to the NBA.

Heather Amberson is a first year journalism major at American River College. This is her first semester on the Current. Amberson hopes to transfer to a four year university and become a sports broadcaster and journalist.