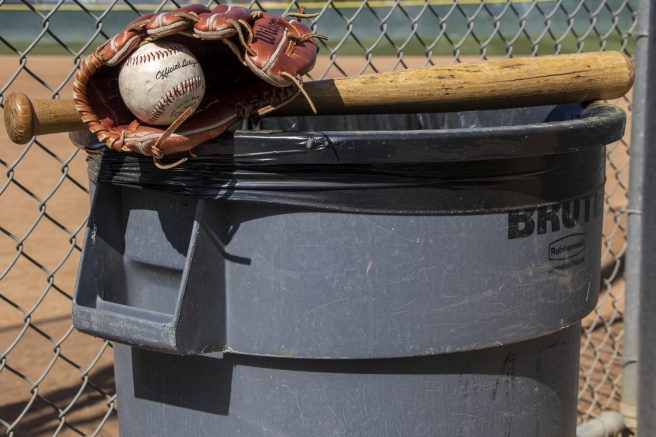 Major League Baseball team, the Houston Astros were caught cheating in the 2017 season by using cameras and trash cans to signal their batters what type of pitch was coming. (Photo Illustration by Brandon Zamora)

For as long as anyone can remember, cheating in sports is something that’s always happened. Teams and players throughout history in every sport have cheated at one point or another and it’ll keep happening for years to come.

However, it was recently discovered that one team did in fact cheat to not only win games, but it cheated to win a championship and was caught doing so. That team is the Houston Astros, and what punishment did they get? A simple slap on the wrist.

This not only makes the Astros and MLB look bad, but sets a really bad example for student athletes. You have a major league sport giving a light punishment to a team who cheated to win the World Series, and are basically saying that it’s okay to cheat. If you’re caught, you’ll get in a little trouble, but you can still call yourself champions.

In 2017, the Houston Astros defeated the Los Angeles Dodgers in the World Series, winning their first championship in franchise history. At the time, this was one of the most memorable World Series in recent history with how close the seven-game series was.

I used to think that game five of the World Series was one of the most exciting high scoring baseball games I’d ever seen with the Astros beating the Dodgers 13-12 in a game that went into extra innings. Now, knowing they cheated that season, including the playoffs, that game has been ruined for me.

In fact, the entire series and championship for the Astros is forever tainted as it was discovered that they actually cheated to win that title. According to Baseball Prospecus’s website, a sports news source dedicated to the sabermetric analysis of baseball, the Astros’ cheating started as early as May. 19, 2017 and carried on through the season, going to the playoffs in October.

According to an article on The Athletic’s website, a national sports news source, at the Astros’ home stadium, Minute Maid Park, a camera was installed in center field that was used to capture the catcher’s hand signals to the pitcher. That camera feed then went to someone working for the Astros in the tunnel, away from the field, and then that person hit trash cans loud enough for their batters to hear to let them know what type of pitch was coming their way.

All of this sounded like pure speculation at first, but former Houston Astros pitcher, Mike Fiers, confirmed that the Astros did in fact use this sign stealing trick in 2017, according to an article on ESPN’s website.

After a further investigation by Major League Baseball, there was enough evidence to prove the Astros cheated, and they did receive a punishment. Well, in a way, they did.

The Astros manager, AJ Hinch, and general manager, Jeff Luhnow have both been suspended from the MLB for one year. The Astros team itself were fined $5 million and lost its first and second round draft picks for 2020 and 2021.

That’s it? MLB only suspends two people for one season, while no players get suspended or fined? They fined the team a few million dollars while players like Justin Verlander are currently making $33 million a year with the Astros, so it’s not hurting the team’s budget too much.

And worst of all, the Astros get to keep their 2017 World Series title. Even though they cheated to win that championship, and it’s been proven that they did, they’re still seen as champions.

People cheat in sports all the time, but that doesn’t make it right. Although if you’re a member of the Astros you may think differently as in a press conference, the Astros owner Jim Crane said that his team cheating didn’t make a difference in the game.

“Our opinion is that this didn’t impact the game,” Crane said. “We had a good team, we won the World Series, and we’ll leave it at that,” according to a video posted on CBS Sports Website.

Using a camera to steal signs, and banging on trash cans to signal your batters what pitch is coming doesn’t affect the game at all? No, that’s not right at all because this team cheated but they’re acting like it’s not a big deal.

What about the teams they cheated against who had a chance in winning the World Series in 2017? It didn’t impact them at all? Because I can guarantee you that it did and they won’t soon forget it entering the 2020 season.

Student athletes who look up to players from this team as role models could see this and think it’s perfectly fine to cheat. What’s going to stop them from trying to cheat from this point on if a major league team who got caught only gets a little punishment and are allowed to keep their title?

The Astros are perhaps now the most hated team in all of baseball, if not all of sports. From not only cheating to win the World Series, but trying to say it wasn’t a big deal. This team deserves every single amount of hate pointed towards them.

We all know cheating in sports will continue because it’s going to keep happening no matter what. Let’s hope that the Astros cheating scandal and MLB’s lack of effort to deal with the issue doesn’t encourage student athletes and even the next generation of athletes to cheat in the same way the Astros did.