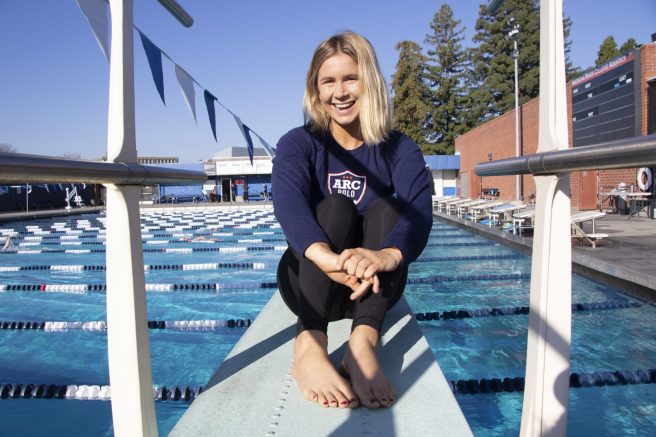 Women's water polo captain Abby Fulton sits on a diving board at the pool at American River College on Dec. 6, 2018. (Photo by Ashley Hayes-Stone)

Abby Fulton not only balances the responsibility of a college student but also the responsibilities of being the captain of the American River College women’s water polo team. It’s her passion for the sport, however, that keeps her in the game.

Fulton says she remembers always being in the water since the age of 5. By age 13, she wanted to try water polo in middle school. Ever since, she has been playing the sport for a club; she played in high school as well as in an Olympic development program.

Her love for the sport drove her to improve herself every day to the point where she became a leading role for others in the sport. She says it’s her natural leadership abilities that landed her the job of an assistant coaching position for the Granite Bay High School girls water polo team.

“I started coaching because I have over seven years experience playing the game,” Fulton said. “While coaching, I tend to echo what my coaches are saying to me and I think when you say it you learn it too, so it pushes me to become a better player.”

Fulton arrived at ARC when the college’s women’s water polo head coach, Bethani Black, recruited her while she was still attending Bella Vista High School. Black said she saw potential in the young water polo athlete and thought she would make a great addition to the team.

“I liked Abby from the minute I met her because she has an internal drive and that’s something you don’t coach, that’s just a God-given talent I think,” Black said. “She’s extremely coachable because she always wants to get better and you don’t always see that.”

But Fulton had other plans; after high school, she found herself at San Francisco State for a semester where she became unhappy due to its lack of organized sports.

A miserable Fulton called up Black to see if there was any way to get on the team and Black was happy to have her. When Fulton arrived, she became a part of the swimming and diving team in spring of 2016. Later, in fall 2017, she played water polo.

Both the team and coaches say they saw the leadership skills and drive that Fulton possesses, so they voted her team captain for both of the semesters she played. She was no stranger to the leadership role since she was captain of her high school water polo team for three years.

“I’ve always been a kind of a natural leader. I like to pump everyone up so I think that’s been my role,” Fulton said.

The women’s water polo assistant coach, Tyson Frenn, asked her if she wanted to help him coach the Granite Bay High School girls water polo team. Fulton accepted the offer and said she feels that the two of them work great together since Frenn is all about the tactics, analytics and she is more the positive enforcer.

She says her coaching style is to bring mindfulness to the team and push the girls by using words of encouragement to keep them from being discouraged.

“I heard this quote from Michael Jordan, he said that ‘the greatest athletes have the shortest memories,’ so it means when we are in the pool and you make a bad pass or you make bad shots you can come back from that,” Fulton said. “So, I’ve been telling them that a lot because they have a bigger game.”

She says she also applies the same mentality when she is being a captain on the team.

Teammate Hannah Torres praises Fulton for her leadership skills and how she sets examples for her team.

“She is just able to lead with example and she’s probably the hardest worker on the team,” Torres said. “She will go above and beyond practice on her own time and I think that’s a great example to show the rest of the girls.”

Fulton says she feels she needed to study in a field that includes her passion for an active lifestyle and eating healthy. She found a major that fits her passions into one; nutrition.

“I truly believe you are what you eat and if you expect your body to do things for you then you need to treat it with care,” Fulton said.

The game plan for Fulton is to finish at ARC with an associate degree in nutrition and to become a dietitian, but she’s on the fence about pursuing water polo.

She currently has an offer to play at the University of Pacific and says she is hopeful to get an offer from San Jose University.

Even though it’s her last season on the water polo team, Fulton says she will take the lessons that the team has taught her and the friendships she has created.

“Some of the teammates are my best friends and when you play on a team you create bonds that are unbreakable,” Fulton said. “Everyone has their thing and you just appreciate what they bring the table.”