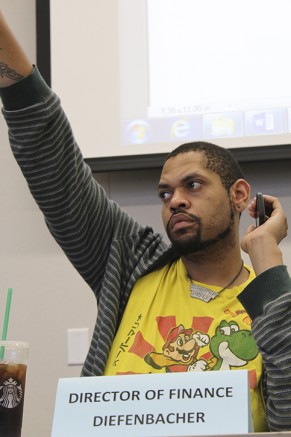 Director of Finance Jeremy Diefenbacher waits to respond to disussion regarding the bill he authored allocating the spending for 10 laptops for ASB members. Senate approved $13,000 for 10 laptops for current and future ASB members to improve the efficiency of the board. (Photo by Robert Hansen)

The Student Senate passed a bill for $13,000 to purchase ten laptops for ASB members use at conventions and committees, and to pass down information to their successors, at Tuesday’s meeting.

The laptops, the Microsoft Surface Pro 4 model, are supposed to help continue the flow of information from current to future ASB members, which has always been a challenge according to Director of Finance Jeremy Diefenbacher.

“It’s so hard keeping track of what happens with previous boards,” Diefenbacher said at a previous meeting.

The bill had been postponed at previous meeting from lack of information regarding the software included, concerns that were again voiced at Tuesday’s meeting.

“We’re not entirely sure what the bundle of Microsoft software would contain,” CAEB President Justin Nicholson said. “We should not go and throw $13,000 at it until we know exactly the product that we’re getting.”

Diefenbacher impressed upon the board the importance of getting this bill passed sooner rather than later, and that these concerns are only preventing the laptops from being purchased.

“I feel like since we’re all in agreement that we need to have a way to upload our documents … and pass it to the next incoming board, we need to make a movement on it and not continue postponing it because these things take time,” Diefenbacher said.

Diefenbacher reaffirmed his insistence on passing the bill immediately.

“We need to make a decision,” Diefenbacher said. “Because it’s pretty much get computers now, for the next year, or not.”

After further board discussion, only Director of Legislative Affairs Laurie Jones voted against the bill.

The Microsoft Surface Pro 4 128GB, shown in the Senate’s quote from Microsoft, comes with the Microsoft Windows Pro 10 operating system.

In a subsequent meeting, the Club and Events Board (CAEB) presented the confirmed games for Wednesday’s Kaleidoscope Games Club Day and postponed the ASB Film Festival.

CAEB has planned its most game-filled Club Day of the semester with over a dozen events planned for the day.

There is also a planned limbo relay, musical chairs and freeze dance.

All events are subject to change in the event that it rains Wednesday.

The first annual ASB short film festival, scheduled for April 22, was postponed until December because there have been zero submissions.

Not one member of CAEB knew any students that were planning on submitting a short film by tomorrow’s deadline.

CAEB plans on giving students knowledge of the festival early in the fall 2016 semester so that students interested will have enough time.