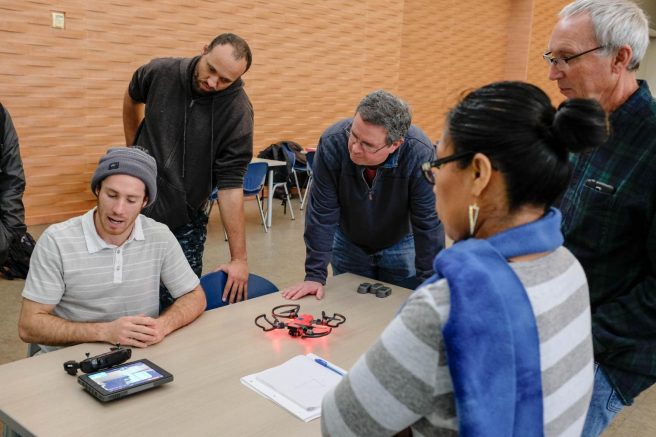 Students of the drone class, Experimental Offering in Design Technology, gather around Sean Franklin (left), who describes the various operations that are available in the drone unit they were flying in the Student Center at American River College on Feb. 2, 2019.

The sound of mechanical buzzing fills the air in the Student Center at American River College. Plastic propellers zip around the room as different groups of students control their movement. Occasionally the objects will impact the ground and a student will have to walk and pick up the drone from the ground to prepare to try again.

This semester, the ARC Design department launched an experimental class DESGN 299. The unassuming title, Experimental Offering in Design Technology, doesn’t begin to show the breadth of what the class offers students.

Every Saturday from 8 a.m. until noon, students at ARC spend time studying and mastering the technology of a drone under the tutelage of design instructor Shane Lipscomb. Their class time is split between learning about the safe and proper operation of flying drones, and interpreting the data that the drones produce.

Whether they want to bring a unique look to their wedding videos or map a construction site, the skills students learn in the class will give them a competitive edge in any industry, Lipscomb says.

“It’s not about the drone, it’s about what the drone can do. So our focus is really on helping students figure out how to use drones,” Lipscomb said.

Along with design technology department head Randy Schuster, Lipscomb formed the class after students in other classes showed an interest in drone technology.

The creation of the drone class dates back to when a design student wanted to use the Design Hub’s 3-D printer to print the frame of a drone. Schuster assisted the student in his efforts, finding electronics for the frame and together they built a functional drone.

Fellow students became interested in drone technology following the creation of the 3-D printed drone, so the students formed a drone club within the design technology department.

“[The Design Hub] became the center for student focus when it came to drones,” Lipscomb said. “That’s when the administration started to say, ‘Well how can you guys do this correctly?’”

Within other departments there was growing use of drone technology, the photography department was experimenting with drone usage — however there still wasn’t a devoted class for drones on campus. After the formation of the drone club and administrative interest in expanding the club further, Lipscomb and Schuster began to form the experimental class for drone technology. 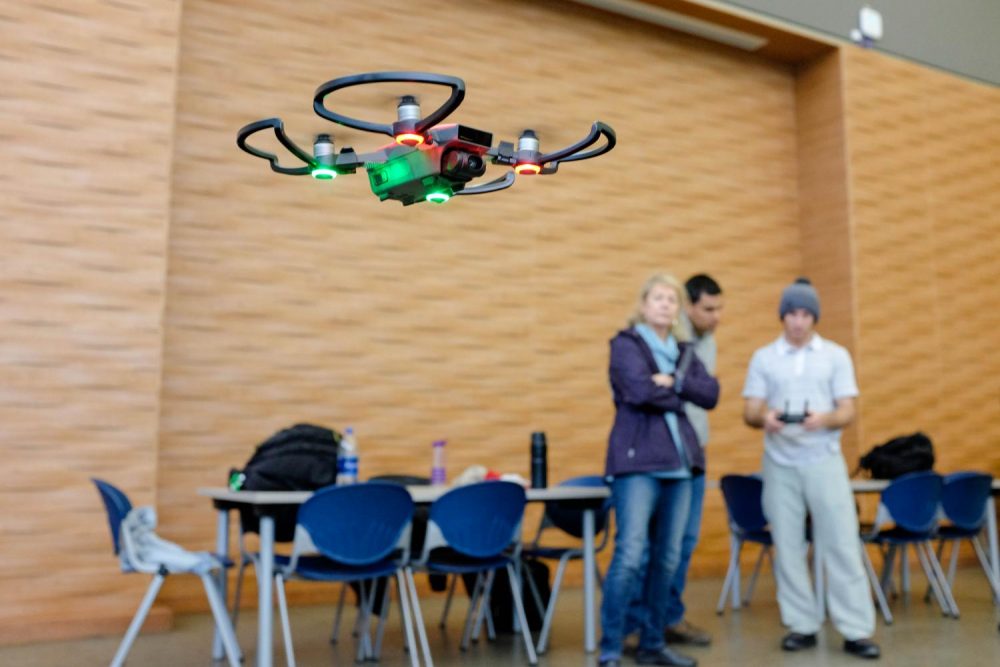 The American River College drone class is an experimental course offered by the design department, providing students with the skills to operate drones in their respective careers and understand how to use the data collected by the drone. (Photo by Patrick Hyun Wilson)

Sean Franklin is one of the students who was in the drone club when it first formed in the Design Hub. He now studies aerospace engineering at the University of California, Davis, however when Lipscomb called and asked him to assist with teaching the drone class, he jumped on the opportunity.

“There are so many opportunities that you can have with drones,” Franklin said. “I’m tapping into some of those opportunities on the side.”

During class, students spend time flying drones in groups. They practice the controls while Lipscomb and Franklin, along with the other teachers, guide them and answer questions they have about the drones.

The final project for the class requires a full knowledge of the operations of drone technology as well as an understanding of the data that the drone collects. Students in the class chose a site on campus and they will use the drones to make high resolution maps of their chosen site.

John Cleveland, music recording major, chose the Child Development Center as his mapping site. He had never learned about drone mapping before, so the class was his first introduction to the drone’s ability to map areas.

“I fly as a hobbyist so I had no idea what rules I was flying under, I could have been flying illegally the entire time I owned a drone.” Cleveland said.

ARC golfer’s drive hopes to take him to the pros

Be the first to comment on "Take This Class: Experimental Offering in Design Technology (DESGN 299)"