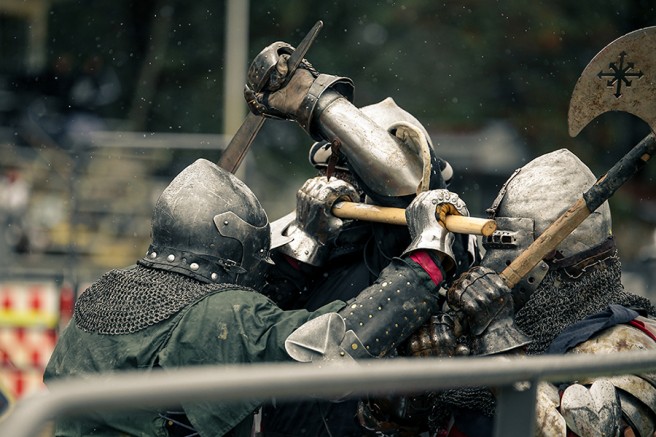 Members of the North West region "WolfPack" battle with members of the USA Knights. The USA Knights are the American national team that competes in the International Medieval Combat Federation. (Photo by Kyle Elsasser)

As the rain pelted down onto their medieval armor, the two men began to stalk one another, figuring out how to defeat their opponent while staying diligent so that no one could tackle them from behind. Armored Combat League (ACL) is a sports organization that features armed combatants who fight in steel armor, looking and acting like medieval knights.

The organization has teams throughout the United States, and each region has an all-star team.

They use real weapons to fight, attacking with swords, axes, maces and shields. The combatants also throw punches and kicks.

While their weapons are required to be blunted to a minimum of two millimeters thickness, the knights are still in real danger.
Erik Saari, who serves as the regional commander for the Grizzlies, said that the worst injury he faced was the tip of his thumb being almost entirely cut off by an axe.

“I went straight to the ER and they sewed it back through the nail,” Saari said. “They did a fantastic job.”

Many of the fighters said that this looks much worse from an audience perspective than it actually is. It is uncomfortable for the reasons people may not automatically expect.

“It kind of jostles you, All the sudden it’s like ‘woah,’ I am looking in the sky, and your neck gets knicked.” Bonnie Jensen said.  “If I get hit in the head, you know my first automatic (instinct) is to go with it, and so your body goes with it too. ”

There are two different matches fought during armored combat events — one on one, and team matches.

One on one matches are similar to boxing and are judged by a 10 point system. Each round lasts a minute, and is scored the best out of three.

The only variety displayed during team combat matches is the number of people allowed on each team.  A fighter is eliminated when they are knocked down to the ground. The round is automatically over when there is only one combatant against more than two opponents. 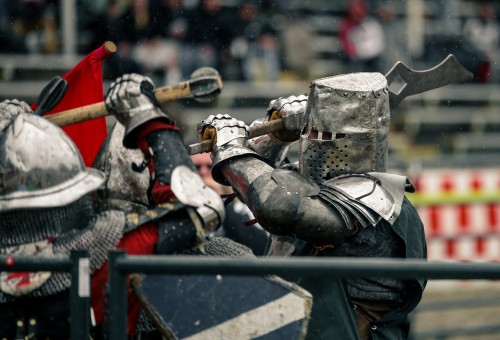 The Northwest region “WolfPack” battles with the USA Knights during the Armoed Combat League U.S. national championship held at the Auburn Fairgrounds on Mar. 5. The USA Knights are a U.S. all-star team and are set to compete in the world championships on May 26. (Photo by Kyle Elsasser)

Similar to that of mixed martial arts in recent years, armored combat league also features female fighters. What separates the league from MMA, at least in the U.S., is that women have a choice to fight against the men. However, this practice is not at all common.

With the small number of women who participate in the sport, at most a match could have three versus three. Most matches involve one versus one.

Adam Vodermark helps create the fighters’ armor and weapons. He said that after years of participating in actual combat with swords and shields, watching films like Lord of the Rings has become hard for him.

“I look at it, and I am like, ‘dude, how are those dwarves holding those swords when the handles are like twice the size of their hands?’” Vodermark said.

Some of the fighters who compete in armored combat have also had experience in martial arts.

Almost everyone who competes in armored combat are not making a living from it.

Balin Mallavia owns a warehouse fulfillment facility that stores products for companies, while Saari is a firefighter. Samantha Matyas, who participates in full armored fighting, said she owns and operates a horse farm in Michigan.

“I work my cardio, I work my endurance, I work on my muscles, because every day I’m tossing hay, moving sacks of grain, and if you can tell a 1,200 pound horse what to do, facing these girls is no problem,” Matyas said. 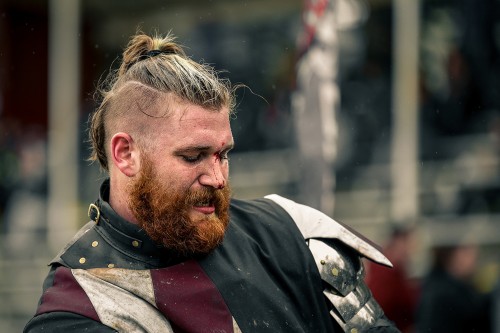 Blood trickles down the nose of a member of the USA Knights after a fight during the Armored Combat League U.S. National Championship. (Photo by Kyle Elsasser)

Andre Sinou is co-founder of ACL and serves the regional commander for USA Knights.

The USA Knights is the United States all-star team, and competes overseas in Europe in the International Medieval Combat Federation. Sinou said that he discovered the international league while he and his friends were looking up videos on YouTube.

The first time that the Knights competed in Europe, the team did not fare as well as Sinou had hoped, but the following year, the team was able to finish in fourth place.

Sinou said his experience with the U.S. Marines has influenced the way he leads his team in armored combat.

He said that when he is overseas, people would comment that members of his team seem like they were military at one point, due to how he organized the team.

When he participates in 16 versus 16, the entire team is broken down into smaller groups, while he is in charge of the whole.

“I have one center unit and two flanking units,” Sinou said. “Instead of coordinating single people, we are actually coordinating units.”

Sinou said that generally speaking, the strategy of teams in Europe is simply to fight the person that is standing directly in front of them.

The USA Knights will be competing in the world championship on May 26 in Montemor-o-Velho, Portugal.

My parents are murderers: Killers’ daughter confronts stigma to speak out

“The Deafhood Monologues,” shines a light on Deaf culture

Be the first to comment on "Ye olde fight club"