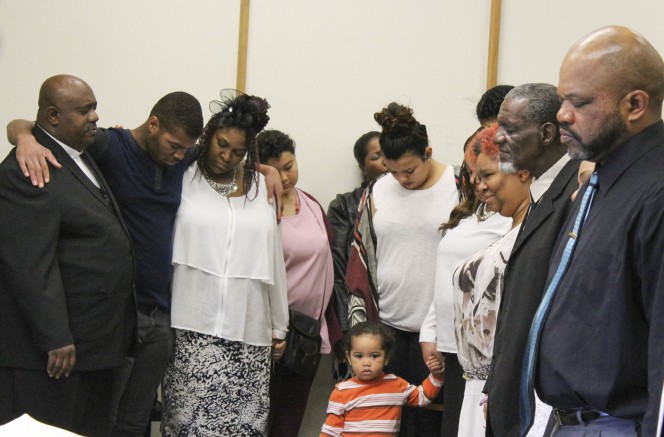 Faith Covenant Community Church’s pastor Kendall Young prays with members of the congregation while embracing one another. The church meets every Sunday at ARC in Raef Hall. (Photo by Timon Barkley)

Small trickles of sweat appear on the preacher’s brow, intensity in his eyes and his voice becoming sharp as he preaches. As he speaks in a calm voice, the audience raises one hand to the ceiling and another to their heart with their eyes shut in agreement.

The room is filled with loud music and prayer, as what is normally a college classroom transforms into a southern black church.

This takes place in Raef Hall at American River College every Sunday. The church is called Faith Covenant Community Church and caters to close to 50 people of various ages. Members of the congregation come from different areas of Sacramento.

They practice communion, a religious ceremony done on the first Sunday of every month. Instead of using wine for the blood of Jesus Christ, they use a substitute such as cranberry juice instead.

“Let us commune together,” said Pastor Kendall Young as he lifted his bread and juice.

Young relocated his family and the rest of his congregation from his original church in south Sacramento.

Young said that he chose ARC so he could “impact this community and hopefully the students on campus.”

Young added that he wanted to focus on students because a lot of young adults don’t believe that God exists and lack the “guidance” that can be provided from a role model like God.

Young and his family have used ARC as a host for their church gatherings for about a year.

Frankie Johnson, who works at ARC as a student personnel assistant in the Center for Leadership and Development, attends the church every week and said praying for others is an important reason to go to church. 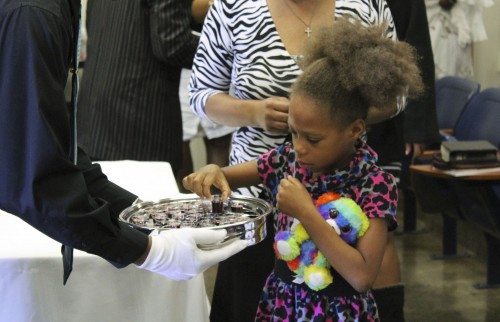 A young girl participates in communion during congregation on Feb. 7. Several children attend the church, including two of Pastor Kendall Young’s children. (Photo by Timon Barkley)

“When praying, you pray for others before you pray for yourself because there’s other people praying for you,” Johnson said. “It helps people feel like they’re doing good things.”

The church’s worship band is made up of Young’s sons, Ke’mar Young and Kameron Young.

Ke’mar plays the drums for the church every Sunday, and said that “reading the bible and being around people who care” are his favorite parts about being in church.

Kameron Young is a singer and an usher for the church every Sunday. “(My favorite part about church) is worshipping and praise dancing,” Kameron said.

Young reminds the churchgoers that we are “living in a world where people don’t know there’s a God” during his sermon.

Cheleysa Oliver said that she relates to the style of Young’s preaching, who is a singer and frequent attendee of the church. While she is a member of another church, Oliver attends the Faith Covenant Community Church with her grandmother.

Young gives advice to the audience, “don’t argue with someone about God. Learn to let it go.”

Young said that the church tries to contribute to the community as much as possible.

“I could be in line at Target, and I’ll pay for the person’s items in front of me and say that the Faith Covenant Community Church shows you love,” said Young.

Young’s intent is for all the those who attend, to not have a hand left untouched and not a single soul left unwelcomed.

Be the first to comment on "Praying at American River College"