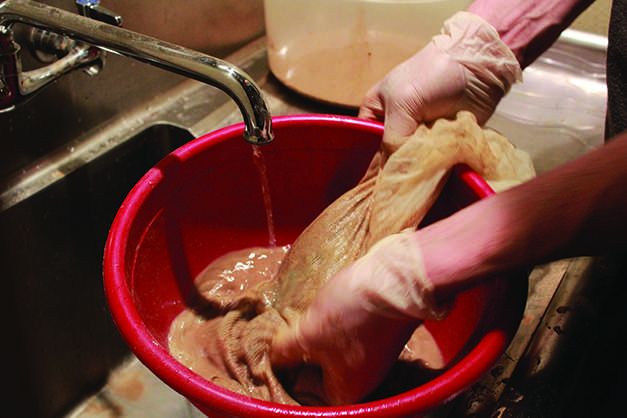 Powdered kava root is prepared by Jacob Ciongoli, a worker at The Root of Happiness kava bar in Rancho Cordova. Photo by Emily K. Rabasto

Self-taught ethnobotanicalist Travis Blythe, who studies sacred plants, claims the effect of kava, a drink made from the pulp of the root of a Polynesian pepper plant, is a “complete and total relaxation of mind and body.”

It is precisely the affinity for a relaxed and carefree experience in kava drinkers that has some people concerned about the emerging kava culture and the risk of addiction and abuse.

“I have seen the devastating effects on the family,” said Gordon Treadway, a Church of Jesus Christ Latter-Day Saints (LDS) leader. “I have seen (kava) tear husbands and wives apart, disenfranchise husbands from wives, fathers from kids.”

Some areas have seen an influx in home-based “kava parties” that have led to reported sexual indiscretions.

It is popular in the Polynesian culture for men who partake of kava to go to “kava clubs,” or private parties in a warehouse, shed, or men’s club, and to spend the weekend away from the family drinking.

The kava is often served by young women who, Treadway claims, are immodestly dressed. He said the mix of men, drink and provocative young women often leads to what he calls “immoral behavior.”

American River College student Bill Clement is aware of the conventions of the kava party from his experiences at Brigham Young University in Provo, Utah.

“A lot of times the guys would invite girls to get them loose,” said Clement, “to get their guard down and do whatever they want with them.”

LDS church leaders have discouraged the use of kava in general, but this, in part, has helped to further disintegrate the traditional knowledge of the use of the root.

The seduction of the physical effects of drinking kava has spurred a growing industry in the U.S., with Kava bars popping up on the mainland over a decade ago, creating a trend in which, instead of being used for ceremonial purposes, kava is used as a mood enhancer.

Blythe and business partner, Tyler Lowin, started The Root of Happiness kava bar in Rancho Cordova early last year, and have plans to open another bar in Davis.

The business of kava is a party environment, with company Facebook posts promising all you can drink kava for $20 and saying “we’re serving a specialty variety of kava from the Solomon Islands tonight and it comes highly recommended by the village chiefs for melting into the couches and vegging out to deep house music.”

The focus of conversations about kava has shifted from understanding the ceremonial aspects of it to prohibiting its recreational use.

“We’re not here to bastardize kava,” said Lowin, addressing the concern about bringing something with ceremonial significance into the general population.
“We are mindful … about educating people about kava, about cultural medicines,” Lowin said.

The task of educating the consumer population about the traditional uses of kava may be difficult, considering the shift in the kava culture, even among Pacific Islanders.
“I find (kava) incredibly relaxing,” said former ARC student Zurab Murayvev, who visits The Root of Happiness occasionally, “although it’s hard to say how much of it is attributable to the environment and how much to the kava itself. I have noticed I feel particularly happy and carefree when I drink it.”

“It’s not part of my everyday life,” said Clement. “I think it should be part of what defines me, but I don’t know anything about it.”

In fact, many other younger ARC students are not familiar with the story of kava’s origin or don’t have an understanding of the traditional kava ceremony.

“Everyone in Tonga knows the story of the kava,” said Okusitino Sitake, a descendent of Tongan royalty living in North Highlands, who said the origin of the root is explained through a tale of sacrifice and honor for one’s king.

But “the young kids, they don’t know about it,” Sitake said.

Clement confirmed that kava has “a very deep ceremonial importance to it that a lot of kids in America don’t know about.”

Michael Grofe, an anthropology professor at ARC who studied the traditions of kava under Harvard-trained anthropologist Richard Katz, indicated that it is a common occurrence for people of one culture to become interested in the ritual practices of other cultures.

“But when Western people adopt consciousness-altering substances from other cultures into their own, these substances often lose their traditional context,” said Grofe.“The traditional purposes for its use are often reinterpreted and new cultural practices start around them, often recreational.”

“(That’s a) big part of the loss,” said Clement. “When you live in America, you start adopting the American way of things … the language, the culture.”

“Where we draw the line… is not necessarily where other cultures draw these lines,” said Grofe. “Even what is considered ‘traditional’ in every culture does change over time.”

Treadway thinks drinking at the kava bar is only marginally better than doing so at a private club or gathering. “(Kava bars) just make it easier to obtain … a beverage that has drug-like effects on them,” he said. “I don’t think that’s positive in our community.”

“(But) I don’t think Polynesian men will leave clubs to go to a (kava bar) … This isn’t like going to get a beer. This is a cultural event. (They’re) not going to a bar to do that … You’ll mostly find ‘palangi’ at the bars,” he said, referencing the Tongan word for “white people.”

Some Polynesians are upset that the bars take something sacred and use it for recreational purposes.

“It’s been horribly changed from how it was used,” said Treadway. “It’s offensive to a lot of Polynesians.”

To read about the origin of kava, click here.

In Our Heads: Brooke Purves