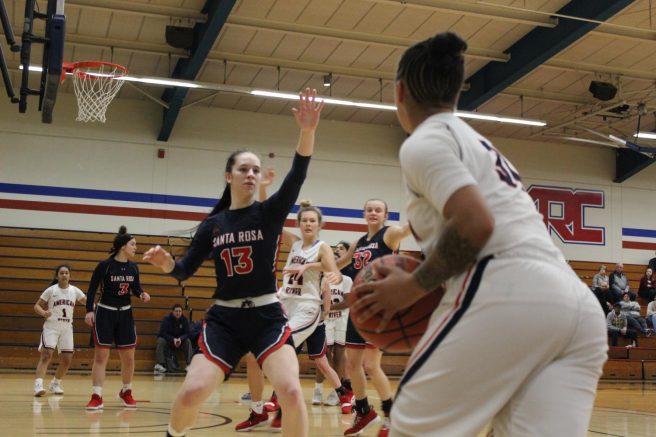 The first quarter started off fast-paced on the Beavers’ end as guard Bailey Bowen-Seay shot and sank the first three of the game.

ARC managed to lock the Bear Cubs down defensively. They had a 8-0 lead on the scoreboard in the first minutes of the first quarter.

By the end of the second quarter, Santa Rosa led by four points, making the score 26-22 going into halftime.

The third quarter was a neck-and-neck battle between both teams as they fought each other offensively and defensively to gain the lead.

ARC discussed their goal of capitalizing on defense rather than focusing on offense, according to a few players. The Beavers started off the third quarter with the same energy as the first, eventually earning an 11-point lead against Santa Rosa.

“We were having a bad shooting night and we just needed to get it back on defense, we weren’t really worried about offense. Offense will come with defense,” said that night’s leading scorer of the game, ARC guard Deja Samuels.

Santa Rosa took the lead coming out of the third quarter but that didn’t stop ARC going into the fourth quarter.

“I think in the beginning of the fourth quarter we played together and hyped each other up defensively and offensively,” said ARC guard, Bailey Bowen-Seay.

In the fourth quarter both teams matched each other’s energy, with Santa Rosa scoring 17 points and ARC scoring 18, according to the American River College Athletics website.

The Beavers were forced to foul to stop the clock and buy themselves time, but that resulted in sending the Bear Cubs to the free throw line and giving away easy points that eventually led to a win for Santa Rosa (57-53). ARC is now 3-11 in conference and now 10-15 overall.

The Beavers will close out the season with Sierra College on Feb. 22 at 5:30 p.m. for Senior Night at American River College.

Be the first to comment on "Beavers drop close game to Santa Rosa, 57-53"