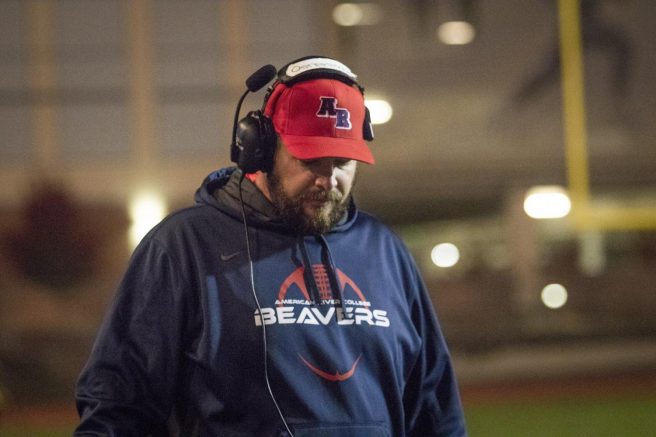 Coach Jon Osterhout stands on the sideline during the loss of the California Community College Athletic Association State Championship at American River College on Nov. 25. (Photo by Ashley Hayes-Stone)

In 2017 American River College’s football team went on an outstanding 10-2 record, coming up just short of the state championship game.

Coach Jon Osterhout is going into his eighth year with the team, and his fifth year as the head coach. After coming off that loss in the semi-final playoff game, he is already planning next season with his team and started spring workouts in January.

After last season, the Beavers also suffered from losing some of the team’s coaching staff on the offensive side of the ball. None of them were fired, however, they left to pursue other opportunities. It is early in the season so there is still plenty of time to find coaches, but they are still without a offensive coordinator.

Many players have left the 2017 team, including starting quarterback Hunter Rodriguez, who transferred to U.C. Davis, backup quarterback Peyton Wifley, and several others on both sides of the ball.

Osterhout knows who and when his players are leaving the team. With the biggest position open for competition, Osterhout says there will be a fight for it come training camp in August.

“I think we do a tremendous job in regards to holding our student athletes accountable and we have a lot of resources here on campus and within our Kinesiology athletic department to help drive student success,” Osterhout said.

One element that is part of the job is Osterhout’s understanding of education. Coach Osterhout also teaches Kinesiology at ARC and says one of his main goals as a coach is to coach a football team with players whose grades are up to par. This is something that Osterhout emphasizes to his team so it can help elevate the program to a high level that’s not only football.

“Each individual in our program needs to own their academics. We talk about building your resume within your time frame here at American River College, that’s essentially your body of work,” Osterhout said.

He added that the students’ grades are critical for players to participate in the football programs.

“That academic piece plays a huge part in regards to not only an eligibility standpoint, we’re talking about preparing yourself for the riggers, the academic riggers of what you’re going to see at the university level,” he said.

Blake Martin is a rotational starter at wide receiver for the Beavers who is going into his last eligible season before he can transfer and play elsewhere. Martin says he wants to get back on the grind for his last season.

Martin also shared that even though players have left from the 2017 team, it won’t stop them from making another run this year as he and other sophomores are coming in to make a difference in winning and will show the freshman how to continue it.

“On a winning basis we’re never going to be finished,” Martin said. “This program is known for football and I’m excited to continue that tradition.”

Be the first to comment on "Spring Preview: ARC Football preps for the new season"