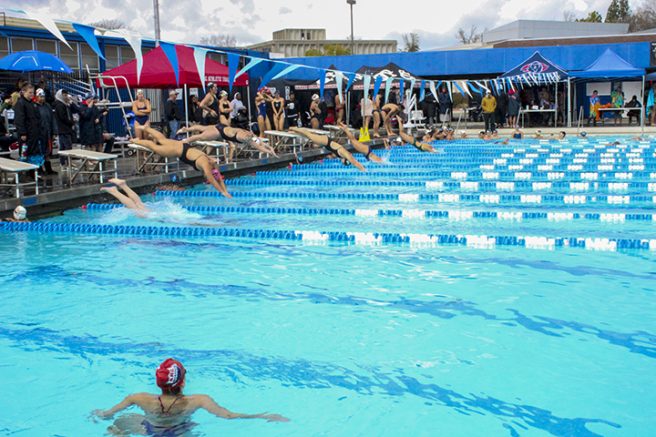 Women's swim teams from eight community colleges across northern California, push off the block for their first time trials of the Big 8 swim invite on March 15 at ARC. (Photo by Cecilia Castillo Juarez

Diablo Valley College dominated the meet, winning 17 races. However, ARC still won a handful of events during the meet.

ARC’s Michelle Akana took first place in the women’s 50-yard free with a time of 24.79 seconds.

ARC swimmers seized other victories throughout the day.

Mary Gorodetskiy is a third-year nursing major and has been swimming since she was 12 years old. Gorodetskiy swam a seasonal best of 1:48.8 on the women’s 100-yard fly.

Teammates and coaches yelled encouragement to the swimmers from the side of the pool.

Bethani Black is the head women’s coach and has been coaching at ARC for 21 years.

According to Black, men and women train together.

“[It’s] nice because it pushes the girls and the girls push the guys, so it works out really well,” she said.

With the swimmers at the height of their season, Black says she thinks they’re doing pretty well.

Black said her swimmers only have a few more meets to qualify for State Championships in May.

“”We’re in that point in the season where we’ve been training pretty hard,” Black said. “We’ve been doing very well.”