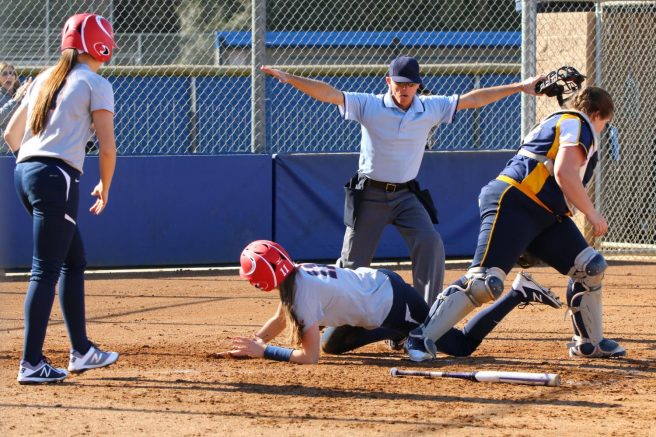 American River College catcher/infielder Rylee Owen is ruled safe at the plate during a doubleheader softball game against Merced College on Jan 27. at ARC. The Beavers won both games with a combined score of 17-1. (Photo by Tracy Holmes)

The American River College Beavers women’s softball team started the season off with a blowout double header win against the Merced Blue Devils on Jan. 27, winning game one 8-0 and game two 9-1.

Pitcher Bethany Thornton started the season right by giving up no runs at the plate.

The Beavers had eight runs batted in (RBI) and eight hits, while Merced had zero.

The Beavers put in pitcher Zinnia Thewlis for game two, who only gave up one run.

In game two the Beavers had six RBI, 9 runs, and 11 hits. Merced had four hits in game two.

Coach Lisa Delgado said she was pleased with how well the women came out and played Saturday.

“The coaching staff is very proud of how we came sprinting out of the gates Saturday. Pitcher, Bethany Thornton started the season with a no-hitter in the first game and Zinnia Thewlis pitched a great game two,” Delgado said.

Samantha Whitworth kept track of the team’s statistics. Whitworth won’t be able to take the field until her transfer from Sierra College is complete. Until then, she says she’s happy to help the team out in other ways.

”I’m keeping track of stats until I get to play next Saturday, hopefully,” said Whitworth, a Health and Science major.

The team was in high spirits and ready to take on more games.