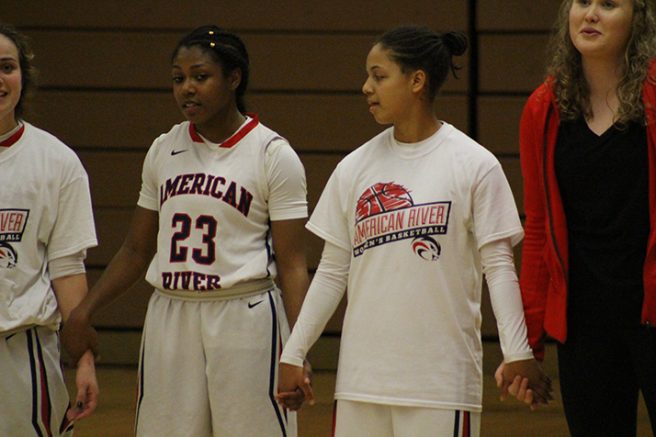 The crowd stirred anxiously as the game clock wound down. Parents, photographers, referees and friends all scurried to their optimal viewing places.

Both players and coaches showed that they had nerves during their warm up drills on Feb. 14 at the basketball court at American River College.

The opposing team examined its competition as the carried on with their own warm ups.

By all appearances, it seemed that all but two people in the gymnasium felt the pressure.

Two ARC freshmen, Deja Samuels and Alana Myers, both kinesiology majors, were all smiles. As they playfully drained three pointers, delivered finger roll lay-ups and encouraged their teammates to get focused, it was evident they felt  confident  of the victory that awaited them.

Both Samuels, a Bella Vista High School alumni.  and Myers, a Monterey Trail High School Alumni, have been playing ball for 12 years. Now, although the women share a sport and a love for the same major, their professions of choice are different.

Myers says she intends to be a personal trainer while Samuels says she has hopes of being a physical therapist. Neither athlete has decided where to pursue her four-year degree.

Through time both women have built a chemistry while on the court by interchanging positions between both shooting guard and point guard.

That  chemistry drives them while playing and causes them to feed off each other’s energy during games.

“When she has her highs, I get high,”  Samuels said.

“Yeah, most definitely,”  Myers replied with a grin.

“I listen to slow songs to calm me down, and I never match my socks”, Samuels said.

“I talk to myself, hype myself up you know? Let’s go!” Myers said.

Their pregame rituals also includes pre game music, Myers’ go-to song before playing the game is “First Day Out” by Tee-Grizzly and Samuels song is “Party” by Chris Brown.

Once the game is over, Myers said she likes to eat Popeyes’ chicken, a side of red beans, and some rice or fries while Samuels said she is open to just about anything.

“After a game it’s whatever I see”, Samuels said.

The duo’s athletic idols are both respected in the sport of basketball.

Both athletes had different reasons when it came their favorite thing about basketball.

“When people younger then me say that I inspire them,” Myers said.

Both Myers and Samuels expressed interest when it came to playing at the next level as well.

“I mean if the opportunity presents itself, I’m down,”  Myers said.

“I want to play overseas, then I would be in the WNBA [Women’s National Basketball Association] after that,” Samuels said.

Caresse Williams, coach for the ARC women’s basketball team, thinks both women have a bright future.

“Both are very good guards and both have potential to move on past this level. Once they understand how hard they have to work: and I believe they’re starting to understand now,” Williams said.

When asked about their favorite hobbies besides basketball, Myers summed up their determination and dedication to their craft.

Opinion: Walk onto a new sport