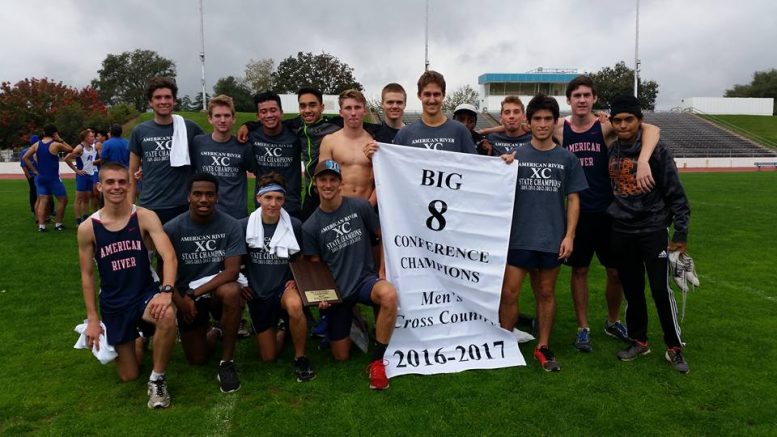 ARC men's cross country team won the Big 8 Conference Championships. They placed six of their runners in the top ten.

A wet home course, a season of injuries and illness did not stop the men’s cross country team from winning their 11th consecutive Big 8 conference title on Oct 28 at ARC.

“The number one goal of the year is to win conference,” said Rick Anderson, coach of the men’s cross country team. “Most people really don’t understand … eleven is the most consecutive wins we’ve ever had,”

“(I) raced well that day. (I) worked with my teammates and kept a steady pace,” Shanahan said.

The men’s team finishing score was 27 points leaving the second place school, Diablo Valley, well behind with their 65 points.

The Beavers sat out their top five runners and still managed to have six of their men in the top ten.

“We raced a two mile time trial that day,” said Anderson. “We had them fight it out.”

Anderson said having the race at ARC wasn’t a huge game changer but Scheidt said otherwise.

“I felt like I raced harder out on the home course … having the confidence that the race was at home, and I felt like our team was going to do very good, gave me that extra mental strength for the race,” Scheidt said.

Anderson said good recruitment and training based on personal best(s) (PB). PB’s that are one hundred percent directed toward his runners are the two things that have made his teams so successful.

“It is really scientific … there is no guess work at all,” Anderson said.

For example, if one of his men runs a four minute mile and another runs a mile in 3 minute and 45 seconds their workouts will be completely different.

It is extremely individualized and even though Anderson gives out exact times for his men to run in workouts, when it comes to races he said after the first mile or so he wants his men to “go out and compete.”

In the end, the methods continue to pay off and though the Beavers finished their season 9th at State Championships, Anderson said, “If I was told before (the season) our results, I wouldn’t be happy but considering all of our sicknesses and injuries … I think the guys did a good job. (We) could have done better but I’m not disappointed in them at all.”

Don’t buy into the vaping industry

Be the first to comment on "Men’s cross country win Big 8, place ninth at State"