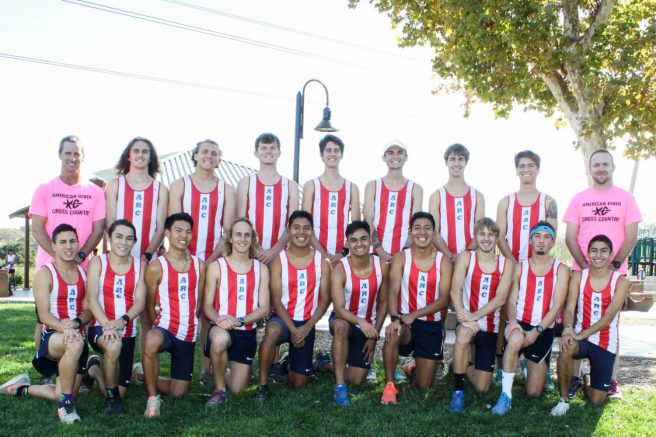 The American River College men’s cross country team placed first in the 2018 NorCal Cross Country Regional Championships at Shasta College, finishing out its season as the first ranked NorCal team and 4th in the state.

Cross country coach Rick Anderson returned the NorCal Championship trophy— which had been at Hartnell College for the past two years— to ARC. His reputation as a championship winner has been proven through his years of coaching at ARC, boasting 18 Conference Championships, 11 Nor-Cal Championships and five State Championships since he started at ARC in 1995.

“I took a picture of the trophy and put the caption, ‘our baby ran away two years ago but now she’s back where she belongs,’” Anderson said.

Their season of victories began at the Fresno Invitational, where ARC ranked third with a score of 96. Each team’s score is calculated by adding the positions of the top seven runners on each team, meaning a lower score is better for the team.

Their top runner, Logan Dodge, placed 15th in the Fresno Invitational overall with a time of 21:48.5 for the men’s race followed closely by Benjamin Blankenburg and Brent Hunter, who took 16th and 17th place, respectively.

“It was the first race with our new freshman and returning sophomores and we weren’t exactly sure how strong we were going to be,” Dodge said. “We did really well and were able to see our potential and set the tone for the rest of the season.”

Following its third place finish at the Fresno Invitational, the ARC cross country team went south to Don Knabe Park in Cerritos for the SoCal Preview race where the men’s team finished in fifth place, with 194 points. ARC’s first runner to finish was Blankenburg in 15th place followed by Josh King in 30th and then Dodge in 48th.

Following the SoCal Preview, the team went on to win the NorCal Preview at Shasta College. Led by Blankenburg in fifth, who was followed by Peterson Vo in 9th, Andrew Ribeiro and Benjamin Kizziar in 11th and 12th respectively, and Jorge Pena in 15th. The final two spots were filled by Brent Hunter and James Wilde in 17th and 25th respectively.

Their victory at the NorCal Preview led them to be ranked first in the NorCal region above Hartnell and Sequoias, and fourth in the state below Glendale, El Camino and first place Mt. San Antonio College.

During the Big 8 Conference Championship, Dodge finished second overall with a time of 23:07 for the men’s 4.1 mile race, followed in third by Blankenburg. The team placed all seven of it’s runners in the top 15 places, Kizziar in ninth, Sebastian Leon in 10th, Vo in 12th, Ribeiro in 14th and Kevin Gonzalez in 15th.

For the ARC Cross Country teams penultimate race, they ventured to Shasta College for the Northern California Community College Cross Country Championships. The team had been ranked number one for their entire season above Hartnell and Sequoias and they would face them both in the Norcal Championships.

Sequoias managed to get a runner in second place, and Hartnell got two runners in the fourth and fifth spot respectively, while ARC’s Vo didn’t cross the finish line until eighth place.

“That was a really close race the first three miles, we were within seven points the whole race and we blew it open in the last mile,” Anderson said.

The Norcal Championship was earned by the team, placing Vo in eighth, followed by Dodge in ninth, Austin Shields in 11th, Blankenburg in 12th, Kizziar in 15th, Sebastian in 22nd.

“Hartnell is sort of our rival, we’re always combatting with them and halfway through the race, Coach Rick was yelling at us, ‘You guys are losing right now!’ Its was that tight,” Dodge said.

The victory was the 10th Norcal Championship win for the team in the last 18 years and the 11th win that Coach Rick Anderson has earned at ARC.

The future of the ARC Cross Country team will be filled with strong returning runners who will only get better with time, according to Anderson.

“The other thing that were trying to do this year is trying to get the Scholar Team Award for the state,” Anderson said. “Which is the team that has the best [Grade Point Average] and the best athletic finish.”