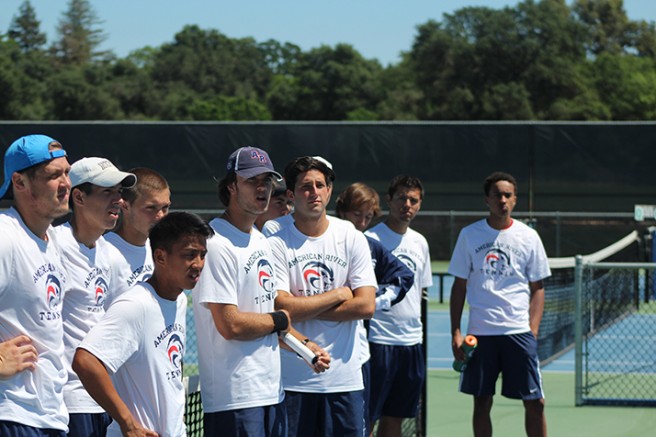 American River College's men's tennis team stands before their match against Foothill College at the NorCal Tournament Final on April 16, 2016 at ARC. ARC went on to win and become NorCal Champions. (Photo by Mack Ervin III)

American River College’s men’s tennis team is headed down to Ventura County, California to compete in the Ojai Individual Championships with the hopes on one player or team bringing back a trophy.

Already having a great season, the men’s tennis team got all four singles entries qualified for the tournament, while also getting their doubles teams through.

Sophomore Alex Meliuk received the No. 1 seed out of both the north player pool and the state pool while Cody Duong received No. 2 from the north and Seppi Capaul at No. 6.

All three players, and teammate Dylan King, automatically received byes into the second round of the tournament.

Women’s tennis doubles partners Kianna Brown and Addie Ramos also made the tournament and received a first round bye. 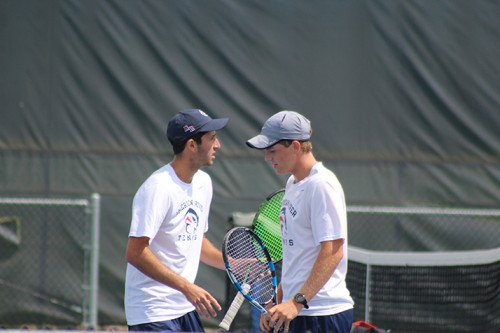 Doubles player Justin Barton said that only giving the best effort will put them in a position to win.

“We’re looking to give our best in that and just prepare as well as we can and give ourselves the best chance to win,” Barton said. “We work harder and prepare better and look up to the future accolades we can make.”

Head coach Bo Jabery-Madison was quick to say that the team’s season is not defined by how many trophies are won and that he is already proud of the team.

“Our season is a success no matter what,” Jabery-Madison. “We’ve worked hard and had a lot of positive outcomes, but more importantly we’ve improved a lot and I think that’s the goal.”

King said that doing what they have been doing all season is the key to performing well and that they shouldn’t change a winning formula.

“I don’t see any reason to change,” King said. “We’ve been doing the right things and as long as we execute when we get there and we play our game, win or lose as long as we’re putting out our best and representing NorCal, that’s all we have.”

TJ Auckland echoed that sentiment saying that the hard work all season is paying off.

“It’s nice to see all the hard work pay off and showing,” Auckland said. “Just keep doing what we’re doing, hit the practices hard, rest up and keep up with the game plan.”

The tournament starts Wednesday with the first round matches.

Everything you need to know about ARC’s Wi-Fi