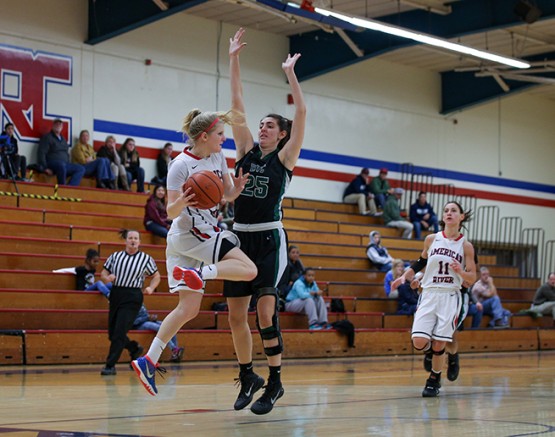 American River College guard Hayleigh Filer looks for an open teammate to pass the ball to before being forced out of bounds, during a game against Diablo Valley College Tuesday. ARC lost to Diablo Valley 70-63. (Photo by Kyle Elsasser)

Freshman guard Jennifer Manduca, who scored 15 points in the contest, said that the team’s main problem is how it starts the game.

Head coach J.R.Matsunami said that the team wasn’t able to make the shots it needed to.

“The key to this game was just hitting open looks, and we didn’t hit enough of them,” Matsunami said. “You may get the open looks but you’ve got to hit the open looks. That’s the difference between Golden State (Warriors) and the Lakers.”

Matsunami also said that injuries and certain players being unavailable may have hindered the team in this run, but is confident the team will make the playoffs.

The second quarter belonged to Diablo Valley as seven of their eight players registered points and extended the lead to 41-25 at halftime.

ARC bounced back in the third by outscoring Diablo Valley by nine and closing the gap to seven points by the end of the quarter.

Despite getting the gap down to two points late in the fourth, Diablo Valley held strong and won the game by seven points.

An incident involving a fan in the bleachers resulted in the scoreboard and shot clock being momentarily turned off late in the fourth quarter. The incident did not affect the game.

American River will look to bounce back and stabilize its playoff hopes against San Joaquin Delta College on Feb. 5.