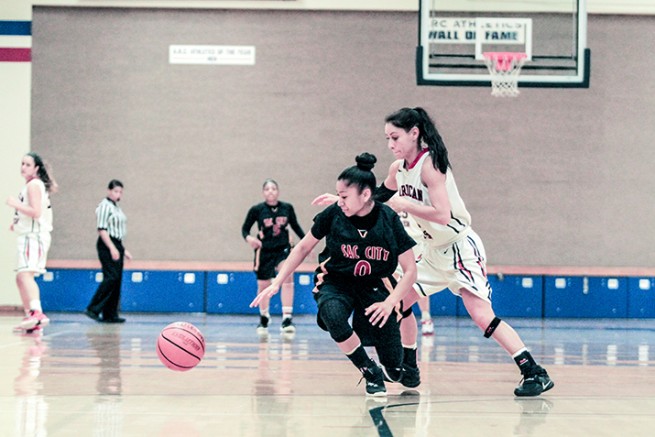 Three technical fouls were called on American River College’s women’s basketball team in the fourth quarter, part of an emotional unraveling of the team that led to a 45-41 loss to Sacramento City College.

Guard Jennifer Manduca and forward Cassandra Jaimes were both whistled for technicals in the span of 43 seconds and the team was issued a technical foul with 3:46 to play for having six players on the court, which resulted in a two-shot penalty.

“I almost want to repeat what I heard from (San Antonio Spurs head coach) Gregg Popovich. It’s men against boys,” said ARC head coach J.R. Matsunami. “You know it was women against girls. (Sac City) decided they wanted to be physical and take the game from us, and we let them.”

Matsunami was referring to Popovich’s comments after a 120-90 loss to the Golden State Warriors on Monday night, a match-up that some described as “the greatest regular season game ever” before the eventual result.

Matsunami did not agree with most of the referees’ handling of the physicality in the game, but did not say that her players need to have more mental toughness.

Jaimes was T’d up after an apparent shove of another player, though she had been going at it with her defender in the preceding plays.

“In my years coaching, I’ve never seen three technical fouls and none of them were called on me,” Matsunami said.

Manduca, who was called for a technical after she dove for a ball following a whistle to blow the play dead, said “our emotions” got in the way of playing well down the stretch.

To improve upon it going further, Manduca said everyone needs to “work harder. And to beat the easy teams. We don’t play good with the easy teams, we play better with the hard teams.”

Despite all the controversy in the waning moments of the game, the team’s offense struggled mightily for most of the game.

ARC held an 11-2 lead after the first quarter and led 22-8 at halftime before only putting four points on the board in the third quarter and being outscored 37-19 in the second half.

Matsunami pleaded with the team through most of the first quarter to run its sets, and it failed to do until the final few minutes.

The second quarter was more consistent, before it all went out the window in the second half.

“I think our defense creates offense,” said guard Haleigh Filer. “I don’t think we were seeing all the options, but they were definitely there.”

Matsunami didn’t try to hide blame from herself.

ARC held at 41-35 with just under three minutes to play before allowing Sac City’s game-winning 10-0 run.

“(Sac City) didn’t beat us on a play, they beat us on free throws,” Matsunami said. “We gave them the easiest possible way (to win) by committing fouls and putting them on the line.”

Matsunami said mental toughness plays a major factor at the end of the game in deciding who wins and who loses.

“If a player’s going to be on the floor at the end of the game, you’re just going to have to be a little more mentally tough than your opponent,” Matsunami said.

Filer said unity from the team will need to improve going forward.

“Just think outside yourself and think for the team,” Filer said. “Think about the whole instead of your emotions.”