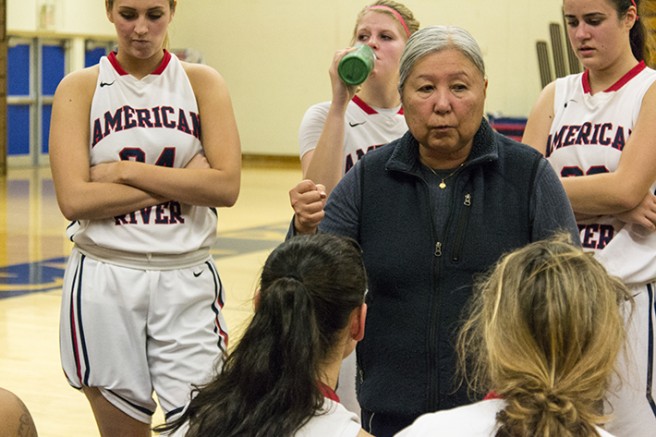 Alternating runs and a back and forth third quarter ultimately wore out American River College’s women’s basketball team, as it was outscored 23-6 in the fourth quarter of a 71-56 loss to Sierra College on Friday.

Forward Cassandra Jaimes led ARC with 17 points, but had only 2 in the final quarter after being relied on heavily to carry the offense.

“Honestly I think we were just tired and rushing shots,” Jaimes said about the offensive struggles in the fourth. “We played well but we could’ve definitely beat (Sierra).”

Normally a high-volume 3-point shooting team, ARC only made one shot from beyond the arc in the loss.

Guard Jennifer Manduca, who averages 13.3 PPG and is the team’s best 3-point shooter at 44.8 percent, was a non-factor from the opening tip, finishing with only 2 points.

Head coach J.R. Matsunami pointed to the foul trouble of starting guard Sariah Loudon as a factor in the team’s second half struggles, as Loudon’s playing time was spotty.

“That hurts us because she’s a leader on the floor,” Matsunami said. “And that’s not so much her as it is the people who come in have to step up.”

After the game, Matsunami stressed, to the team, the importance of accountability both when things are going well and not well, and that the role players need to step up if the team is going to take the next step.

“We did tire down,” Matsunami said. “I play certain players big minutes.”

The team’s defense seemed to disappear in the fourth quarter, as Sierra got to the basket at will in its biggest offensive output of the game.

Although ARC’s offense had a steady flow in the first half despite the lack of 3-pointers, the ball movement largely dissipated in the final period.

“We just lost our momentum,” said forward Bengu Atik, who finished the game with 11 points and made the team’s lone 3-pointer. “We weren’t getting back fast enough.”

The teams traded several large runs through the first two quarters, both putting up 8 to 10 unanswered points following timeouts on multiple occasions, with Sierra holding a 30-29 edge at halftime.

Neither team gained a large edge at any point in the third quarter, and Sierra eventually trounced in the fourth to finish off the win.

“If we’re not doing good at the 3, (we need to) just dominate where we can,” Jaimes said. “Play hard in both positions (offense and defense) because you don’t know what you’re going to get in a game.”

The team next plays on Tuesday, hosting Sacramento City College at 5:30 p.m.

Be the first to comment on "ARC runs out of gas in fourth quarter, loses to Sierra"