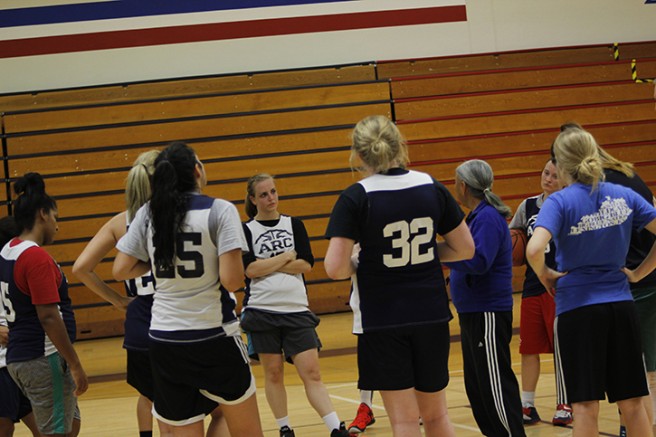 After getting off to an 0-7 start last season, American River College’s women’s basketball team has vastly improved to start the 2015-16 season 6-1 and expected to make a playoff appearance this season with a deeper and more skilled team.

This team’s six wins already are more than the total of last year’s team, which finished 10-16 overall.

“Last year’s team was my most challenging year at American River,” said ARC head coach J.R. Matsunami. “We only had eight players and they weren’t that basketball skilled, so to go from that to now I’m looking at 14 players who can play the game. It’s like going from riding a Vespa to driving a Cadillac.”

The team won the Cosumnes River College basketball tournament and placed second in the San Joaquin Delta College tournament, where its only loss came to Delta, the No. 1 team in the state.

“We felt we could have played with them but one of my best players (sophomore guard Haleigh Filer) hurt her hand and was really ineffective that game,” Matsunami said. “When we face them again in conference we think we’re going to have a pretty good contest then.”

Having such a deep team is quite unusual at the junior college level, as Matsunami tries to use all 14 each game.

Though currently injured, Filer, the team’s second leading scorer at 12.7 points per game, is optimistic about this year’s squad.

“I think we’re a special team and we have a lot of talent and we should win a lot of games and come out on top,” Filer said.

The team, which is eighth in the state in 3-point percentage, will be more of a perimeter team this year than last season.

“The kids are more Golden State (Warriors) fans than Kings fans so they like that style of play,” Matsunami said. “It’s not pound it inside, you know, score by twos, it is what you can do from the 3-point line that’s going to dictate everything.”

Recent rule implementations combined with the team’s depth has made it difficult for Matsunami to develop a consistent substitution pattern. She believes that in the long run the rule changes will help the team because they are so deep.

“Now women’s basketball has gone to ten minute quarters and it really makes the game faster,” Matsunami said. “It’s harder to substitute the quarters as it is to halves because you think you have 20 minutes to get all 14 (players) in and it’s really hard to get 14 kids into the flow of the game.”

Something the team is always working on is chemistry. Matsunami wants her team to stay focused on the task at hand and locked in on their assignments for the full 40 minutes.

“We’re always aware of our team demeanor, that everything we do we try to do, not without emotion, but to keep our emotions in check so that what we do is so controlled and objective and it’s always for the best of the team,” Matsunami said.