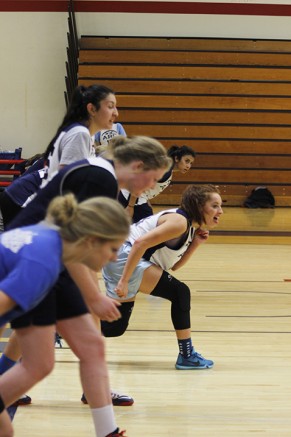 Members of American River College's women's basketball team prepare to run during practice on Dec. 2 2015. ARC has started its 2015-2016 season 6-1 after it started 0-7 a season ago. (Photo by Kevin Sheridan)

After it got out to an 0-7 start in 2014, American River College’s women’s basketball team reversed its poor start in 2015 and is 6-1 heading into Friday’s matchup at home against Lassen College.

ARC heads into its eighth game of the season on Dec. 4 against Lassen College (4-5 overall) on a four game winning streak, having defeated Shasta College on Nov. 24 by a score of 50-47.

“We had a very good recruiting year, but at the same time we had some redshirts who came back and this is really their second year,” she said.

ARC ranks seventh in the state in three point percentage at 35.1 percent through its first seven games.

Freshman guard Jennifer Manduca is tied for seventh in the state for 3-point field goal percentage at 57.1 percent on 12 of 21 shooting.

During the offseason, ARC completely revamped its offense to feature the 3-point shot based on some of the team’s new players, which Matsunami described “quicker and faster” than last season.

“We’re playing more to the 3-point shot than we ever have,” said Matsunami. “It’s a fun game, we live and die by the outside shot.”

Matsunami added that this roster is “night and day” better than last year’s.ARC’s ability to hit 3-point shots could play well against a Lassen defense that allows opponents a 3-point percentage of 35.8 percent, which ranks 85th in the state.

Sophomore shooting guard Hayleigh Filer said that this mismatch is an advantage for ARC.

“Our 3-point game is really strong, so it’s definitely an advantage,” said Filer.

While Lassen’s defense has struggled to stop its opponents from having success shooting on the outside, its offense has played well so far this season by putting up 551 points to rank sixth in the state.

ARC has 14 players on its roster, nearly double the amount it had a season ago. It is this depth, Matsunami said, that aids in her team’s rotation.

Sophomore center Cassandra Jaimes, who started 22 out of 26 games for ARC a season ago, said ARC is very deep in talent.

“Everyone on our team can play,” she said. “That helps us just in case players get tired, we have subs.”