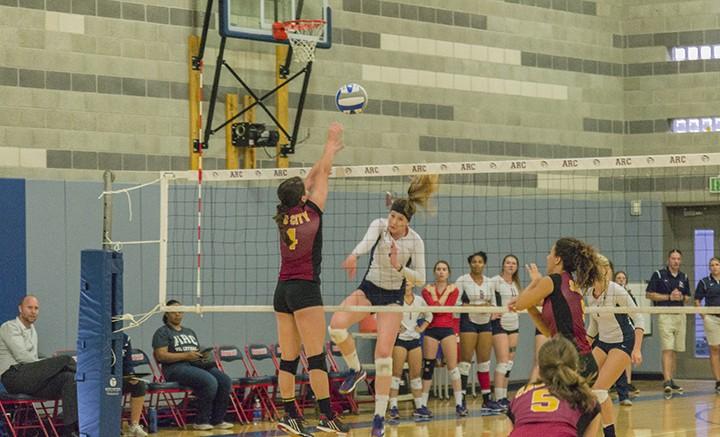 American RIver College libero and defensive specialist Nora Troppmann scores over Samantha Kepler of Sacramento City College during her team's match at home on Oct. 2, 2015. ARC went on to win the match 3 games to none. (photo by Joe Padilla)

A previous version of this article falsely reported that the player scoring was Taylor Ladines. In fact, it was Nora Troppmann.

American River College’s volleyball team defeated Sacramento City College in three games by scores of 25-12, 25-21, and 25-22 in game where ARC was able to hold off a late rally by Sac City.

ARC led the entire first game with strong serves and returns, many of which were spikes.

Play intensified midgame as ARC was able to add points, ending several volleys with tips into an area in the middle of Sac City’s front zone.

Game one ended when ARC outside hitter/opposite hitter Nora Troppman served the winning point for a score of 25-12.

Early in game two, ARC setter Monica Udahl served for a five point run that put ARC ahead for a lead they never lost.

Sac City’s determination showed itself in the third game, as a point on another volley brought the score to 7-6 Sac City.

“We had to come together to step up,” said Ladines. “We had to play as one team instead of six individuals.”

Outside hitter and middle blocker Dani Schoen spurred on a rally when her serves brought ARC ahead with a score of 21-18.

Sac City attempted to rally with a timeout in order to regroup and regain the lead.

Despite the break, game three ended with a 25-22 ARC win.

Gardner, who is in his first season as ARC’s volleyball coach, hinted that his team is a target every game.

“Every team wants to beat (ARC) every night,” said Gardner.

“We played at our level and didn’t let our game suffer depending on what they did which is something we’ve been working really hard on,” said ARC assistant coach Rheann Fall.

ARC volleyball will be be taking its six game winning streak on the road, as it will go on the road at Diablo Valley College on Oct. 7.

“It’s our first traveling conference game,” said Fall. “It will be kind of different for the new girls traveling during the week which we haven’t really done so but as long as we do everything we’ve been working on and stay focused on all of the small things then working together the whole time it should be fine.”

Iris Page is a first-semester student on the Current. Iris is majoring in journalism and plans to transfer to Sacramento State.