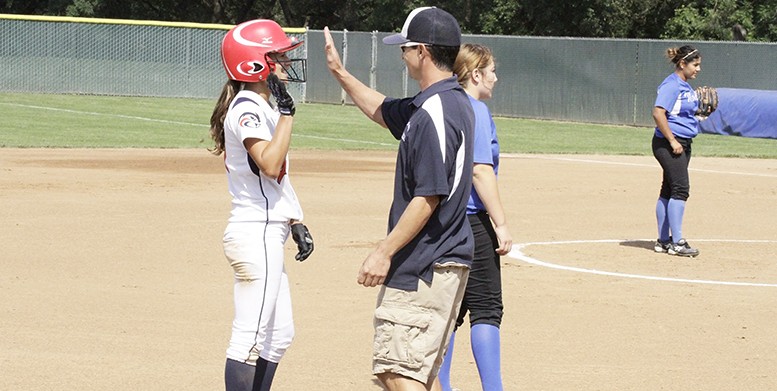 ARC took a 2-1 advantage in the first inning after a run scored off a single from infielder Emily Butcoff.  Butcoff went three for three with three runs and a walk against Modesto.

ARC’s lead continued to grow to 5-1 by the second inning due to a few well placed singles that were stretched into run-scoring plays.

Modesto cut the deficit in the third inning after a wild pitch from Sharie Albert and two extra base hits narrowed the lead to two.

ARC allowed the lead to slim to one run after being retired in order its half of the third. Modesto scored on a sacrifice fly by infielder Nicole Vasquez.

Both Michelle Tarlandoukht and Albert each hit triples, scoring four of the five runs in the fourth.

Leading 11-5 by the fourth inning, Butcoff doubled and brought in a run then scored herself to force the game to end due to the eight-run rule.

ARC head coach Lisa Delgado felt her team had become more of an extension of her family rather than just players.

“Sharie, the girls really rallied around her,” said Delgado on what impressed her most this season.

Delgado said she would be confident with the team heading into next season, as eight freshman made starts in the game.

Esparza was ready for the game as she hit two home runs in practice before the game against Modesto.

“(I) was excited for today, felt it in practice, felt it all season long.”

Esparza had began the game by singing the national anthem and had ended it by saying goodbye to her sophomore teammates. Esparza says she was inspired by pitcher Lolli Conway.