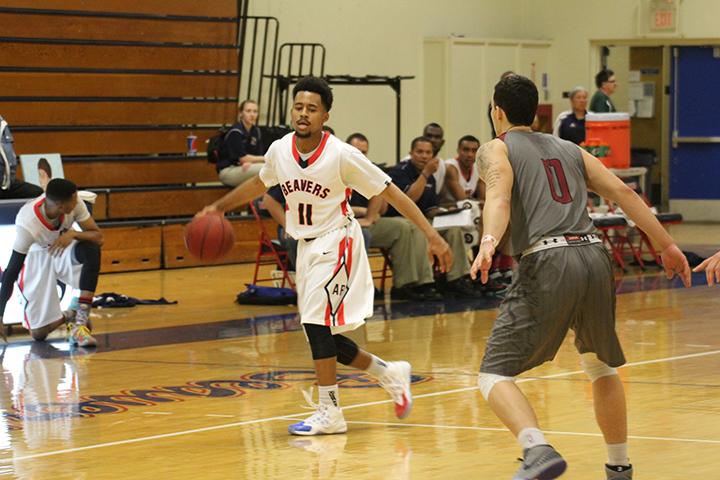 American River College men’s basketball team prevailed over Sierra College Tuesday night by a score of 78-59, thanks in part to a 20 point lead taken by ARC in the second half.

The victory left ARC one win away from a potential playoff berth, as it travels to Stockton on Friday to play at San Joaquin Delta College in its final game of the regular season.

ARC came out of the gate early with a 14-9 lead, with Sierra pulling to within a basket by the two minute mark of the first half.

With great ball movement from all five positions, ARC was able to coast to a lead of 63-43 with over eight minutes left to play in second half.

“Having the ability to pass out of the post is very valuable,” center Eugene Crockett  said on his contributions.

ARC Head Coach Mark Giorgi was animated on the bench, frustrated with his second half offense.

At one point, he even referred to the team’s offensive play as that of “five year olds.”

“It’s human nature. When you get up 20, everything goes out the window. Do what you been doing that got you there,” said Giorgi.

Sierra went on a six point scoring run with less than 2:30 left on the clock, then resorted to fouling in an attempt to get the ball back for the remainder of the contest.

Watkins was nominated at halftime with the Alex Mirkovic scholarship.

Mirkovic was an ARC student athlete whose sudden death occurred due to a genetic disorder known as Marfan syndrome. Since then, the Mirkovic family helps fund the scholarship named in his honor.

Giorgi said of Watkins, “My nickname for him is Hector from Troy, because he’s our warrior. I think he brings toughness first and foremost.”

For Sophomores Jarvis Watkins, Kei’shaun Sinclair and Eugene Crockett, it was their final home game as members of ARC’s basketball team.

Both Watkins and Crockett will finish their degrees at ARC before transferring.

Friday’s contest against SJDC has possible playoff implications for ARC.

ARC walks off its season with 9-8 win