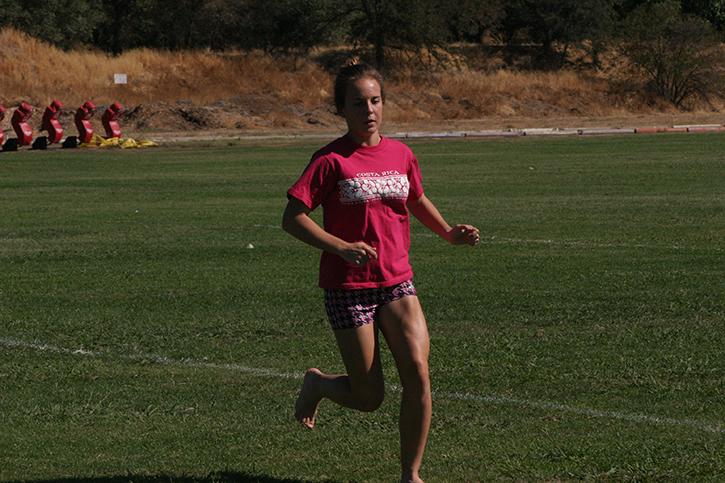 American River College cross country runner Jenica Dodge may only be a freshman, but is already the fastest on her team.

She ranked second at the Crystal Springs Invitational and Lou Vasquez Invitational, and she finished at a time of 18:43 at the Fresno Invitational.

As for her all time best, she says it’s at 18:33, during her senior year at the California state meet.

Dodge has ran cross country ever since she was eleven years old.

She was the top track distance girl all four years of high school, and was also the fastest female runner for her cross country team during her senior year.

“Being the fastest runner doesn’t have a feeling that I can describe, but leading them is a privilege, and I love being able to lead such an awesome group of girls,” said Dodge.

As part of her training regiment, Dodge and her cross country team do different types of workouts, from tempo workouts, long runs, cross training, swimming in the pool, riding on bikes, and weight training.

As for the upcoming competitions, “I am really excited for our Mt. SAC, which is in Los Angeles. This race is really important because it’s a nationwide known course,” she said.

For Dodge, cross country is a very rewarding sport.

“When I was eleven, I heard that they were starting cross country in elementary school. I also took after my dad, who’s a runner too, so he was my main inspiration in the first place,” she said.

“My dad, who’s basically my coach, and essentially my biggest fan, (is my biggest supporter) because he will talk about running with me and he’s my biggest inspiration as well,” Dodge said.

Dodge’s coach, Jeanette Powless, who’s been coaching for 30 years, feels grateful for having Dodge on her team, “We’re very blessed, she comes to us from Whitney High School, and we’re hoping she gets better. She ranks at top ten, and we’re hoping she gets a scholarship soon,” she said, “We have a 100 percent graduation rate for our women’s cross country team plus graduation into a 4-year University from American River College.”

Powless feels hopeful for her cross country team. “I’m very blessed to be with this group, because they’re a very good group of ladies. This season, I’m blessed. It’s a very great (one) for us this year,” she said.

As for the upcoming competitions, the cross country team will have a Big 8 conference on Oct. 31, at Granite Regional Park in Sacramento, in which Powless said her team will make their big emphasis.

The cross country team will have a total of four more competitions, which include the NorCal and State Championships in November.